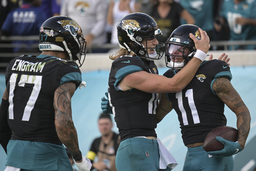 DETROIT (AP) Normally, a December matchup between 4-7 teams wouldn't get much attention.

The Detroit Lions and Jacksonville Jaguars, though, might be worth a watch on Sunday. The young teams are playing much better than they did during terrible starts to the season.

At the end of October, the Lions were 1-6, but they started November with wins over the Packers, Bears and Giants - the last two on the road - before taking Buffalo to the final play in a 28-25 Thanksgiving Day loss.

The Jaguars finished October at 2-6, but beat the Raiders at home, played a decent game in a loss at AFC-best Kansas City, then came back from their bye to beat the AFC North-leading Baltimore Ravens last Sunday.

"Our whole focus has to be on the team that's coming in here on Sunday, because they are very much a mirror image of us," Lions coach Dan Campbell said. "They are starting over a little bit with a new coach, and they are hungry with a ton of talent coming off their best win of the season.

"If we don't understand that, we won't have a chance. If we do, I like our odds."

The Jaguars and Lions have gotten to 4-7 in different ways. Jacksonville has outscored its opponents by 12 points and ranks near the league average in both scoring offense and defense.

Detroit, though, has built an explosive if inconsistent offense. The Lions rank eighth in the league in points and have scored 30 or more five times. They also had a two-game stretch sandwiched around their bye in which they totaled a pair of field goals in losses to Dallas and New England.

Detroit's defense has been awful, ranking last in the league in points allowed at 28.2 per game. It has allowed 24 or more points in nine of 11 games, only keeping Green Bay (9) and the Giants (18) below that total.

"They've been scoring points - that hasn't been one of their issues," Jaguars coach Doug Pederson said. "I think they are more comfortable in the second year of their system and Jared (Goff) is obviously confident in the guys around him."

The difference in the game could be Trevor Lawrence going against a struggling Detroit secondary. Campbell is hoping to have cornerbacks Jerry Jacobs and Jeff Okudah back from the concussion protocol.

Lawrence had one of the best games of his career in the 28-27 win over Baltimore, throwing for 321 yards and three touchdowns.

"Early in the season, we had a lot of turnovers in the red zone, and that's something I've worked on constantly," Lawrence said. "You obviously want to score a touchdown every time you are in the red zone, but you can't be a superhero and end up making a mistake. Take three points if that's what is out there."

Unlike Goff, who has been to a Super Bowl with the Los Angeles Rams, Lawrence has spent his short NFL career on bad teams. The Jaguars went 3-14 under Urban Meyer and interim coach Darrell Bevell last year, then got off to a slow start this year under Pederson.

That's quite a change from his college career. Lawrence went 38-2 at Clemson, won a national championship and made two other trips to the College Football Playoff.

"After the struggles we've had in the last year and a half, I've learned how much harder it is to win in the NFL compared to college," he said. "I was used to winning, and I had to change my perspective a little bit.

"It takes a lot, but we now have the confidence we can go out and beat anybody."

So do the Lions, which could make this an interesting matchup.