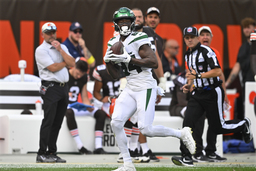 CLEVELAND (AP) Everything was stacked against the New York Jets. The clock wasn't in their favor, and Cleveland's frothing home crowd was making things harder.

The Jets had Joe Flacco. And that was enough.

Flacco fired a 15-yard touchdown pass to rookie Garrett Wilson with 22 seconds left as the Jets rallied for an improbable 31-30 win over the stunned Cleveland Browns, who blew a two-touchdown lead in the final two minutes Sunday.

On third-and-10, Flacco - who had four TD passes one week after a rough opener - found a streaking Wilson over the middle. Earlier, the 10th overall pick had dropped a crucial pass, allowing the Browns (1-1) to open their two-score lead.

"Just a calming force," Jets coach Robert Saleh said of the 37-year-old Flacco. "He has been in a lot of these situations leading a bunch of young men. I thought he was cool, calm, got the ball where it needed to go, and they left the door open just a crack.

"Just a crack for our guys to break through was awesome."

The Jets (1-1) scored two TDs in a span of 60 seconds - a New York minute - to wreck Cleveland's home opener. According to ESPN Stats, teams had won 2,229 consecutive games when leading by at least 13 points in the final two minutes.

The last team to blow that kind of lead was the Browns in the 2001 season against the Bears.

"You look at the score and we're down with 1:30 left, you know your chances aren't too hot," said Wilson, who finished with eight catches for 102 yards in his second game. "But they made some miscues. That's basically what happened."

Nick Chubb's third rushing TD put Cleveland up 13 with 1:55 to go, but the Browns bemoaned not having him stay in bounds and killing more time after the Jets called their last timeout with 2:09 remaining.

"That's a scenario where that is on me to communicate that to the huddle," coach Kevin Stefanski said. "We have done that before. Having said that, we need to close that game out."

After Chubb scored, Browns rookie kicker Cade York, who made a 58-yard field goal in the final seconds to beat Carolina last week, pushed his extra point to the right.

"I thought I hit it well off the foot," York said. "I really don't know why it took off right on me."

Leading 30-17, Cleveland's defense had a major breakdown as Jets wide receiver Corey Davis got behind the secondary and Flacco hit him with a 66-yard TD left to pull the Jets within 30-24 and give them hope.

"When I threw the ball, I looked and saw nobody is anywhere near him," said Flacco, who improved to 18-3 against the Browns. "It was really weird because of how quiet it got here. That's something I've never heard before. It was so loud, and all of a sudden, there was silence."

New York then recovered an onside kick and Flacco, who's filling in while starter Zach Wilson recovers from a knee injury, drove to the 15 without any timeouts before hooking up with Wilson.

"When (offensive coordinator) Mike (LaFleur) called the play, I kind of had a smile inside," Flacco said. "Their safeties were playing pretty soft, so I was going to find a window to get it to him."

Greg Zuerlein made the deciding extra point to make it 31-30.

Cleveland had one last chance, but Jacoby Brissett, who had injured his left ankle in the fourth, was intercepted by Ashtyn Davis with 6 seconds left.

It was a demoralizing loss for the Browns, who were on the cusp of going 2-0 for the first time since 1993, when Bill Belichick was their coach.

"This league is funny," Brissett said. "This one was tough. It just shows you can't take anything in this league for granted. Not even talking about the end of the game, a bunch of plays early on, miscues and things of that nature."

Brissett, starting while Deshaun Watson serves his 11-game NFL suspension for alleged sexual misconduct, threw a TD pass to Amari Cooper and finished 22 of 27 for 229 yards.

Zuerlein's 57-yard field goal with 14:19 left tied it at 17 for the Jets. The kick matched the longest in franchise history by Chandler Catanzaro against the Browns in 2017.

The Jets snapped their 13-game game losing streak in September.

Thomas was inducted into the team's Legends Club during halftime ceremonies. He was honored along with the late Darrel "Pete" Brewster, who played both tight end and defensive end for Cleveland from 1952-58.

Thomas, who retired after the 2017 season, is eligible for enshrinement in the Pro Football Hall of Fame's next class.

Jets: Rookie CB Sauce Gardner left briefly in the third quarter with an apparent head injury. He was checked in the sideline medical tent and cleared to return. ... DL Quinnen Williams injured a foot but came back.

Browns: Brissett expects to play Thursday against Pittsburgh. ... DE Jadeveon Clowney left the stadium in a walking boot after injuring his right ankle in the third quarter. ... TE Harrison Bryant left after a scary collision with LB Kwon Alexander in the fourth but returned. ... RT Jack Conklin was inactive for the second straight week. The former All-Pro underwent knee surgery in December.

Jets: Continue their four-game AFC North swing to open the season by hosting Cincinnati on Sunday.

Browns: A short turnaround with a Thursday night home game against the Steelers.