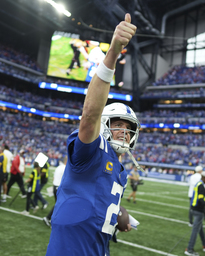 As the 37-year-old quarterback looked around the huddle, he sensed his Indianapolis Colts teammates would find a way to make some big plays late. Eventually, with a little help from the Kansas City defense, they did.

Ryan capped a masterfully managed final drive by finding rookie Jelani Woods on a 12-yard touchdown pass with 24 seconds left for a 20-17 comeback win over the Chiefs. It was Ryan's first victory with the Colts - sealed by Rodney McLeod Jr.'s interception with 2 seconds to go.

"Sometimes you have a game where it's just not right and you have to tighten things up, but you can't be uptight," Ryan said, referring to last week's shutout loss at Jacksonville. "You have to be loose enough to believe we're going to make these plays."

While this one certainly wasn't pretty and, at times, was downright ugly, the Colts (1-1-1) still managed to snap a four-game winless streak that dated to last season's final two games. Indy looked listless in all four.

This time, the defense stymied Patrick Mahomes & Co., giving up just a field goal in the second half and two touchdowns following turnovers in Colts territory. The offense, meanwhile, did just enough to take advantage of some uncharacteristic Chiefs miscues.

And when it mattered most, Ryan was at his best. He finished 27 of 37 for 222 yards despite getting sacked five times and losing two fumbles. And he found Woods twice for touchdowns. The first gave Indy its first lead of the season and the second one, wrestled away by Woods, gave Indy the win.

"That's the player we expect Jelani to be," coach Frank Reich said. "He's a big man and he's fast. You could see his growth in the offseason and during training camp. He's just continued to get better."

Chiefs kicker Matt Ammendola missed an extra point in the first half and a 34-yard field goal just before Ryan led the decisive drive. Ammendola was replacing an injured Harrison Butker.

Plus there was a fake field goal that resulted in a turnover on downs.

Still, the Chiefs appeared to be in control after Clyde Edwards-Helaire's 1-yard TD run and Travis Kelce's 2-point conversion catch made it 14-10 late in the first half.

But after three third-quarter field goals gave the Chiefs a 17-13 lead, they didn't score again and couldn't stop the Colts on the final 16-play, 76-yard drive that took nearly 8 1/2 minutes. Mahomes then threw his first interception of the season.

"Whenever you're playing a tough game like this one, you have to execute at a high level," Mahomes said. "Our schedule gets no easier, so we have to get better quickly. If we don't, the Ls are going to start piling up."

Mahomes wasn't happy with the play-calling at the end of the first half and as the Chiefs walked off the field, he let offensive coordinator Eric Bieniemy know about it. The two exchanged words on the field before coach Andy Reid stepped between them.

"I wanted to go and try and score," Mahomes said. "We were in a tough position and the smart thing was to go to halftime. I told him (Bieniemy) to let me have a chance at it and then he said, 'Let's just get back to the locker room and get something going for the second half.'"

Chiefs: Reid said there were no significant injuries Sunday, though right tackle Andrew Wylie and safety Bryan Cook both left the game briefly.

Colts: Safety Julian Blackmon (left ankle) and cornerback Stephon Gilmore (hamstring) both left in the first half. Gilmore returned, Blackmon did not.

Chiefs: Mahomes fell to 13-3 in September while going 20 of 35 for 262 yards with one TD. He was also the Chiefs' top rusher with four carries for 26 yards. ... Kelce caught four passes for 58 yards and one TD in addition to the conversion catch. ... JuJu Smith-Schuster had five catches for 89 yards.

Colts: Ryan has fumbled seven times this season - the fifth-highest single-season total of his career. He's also been sacked 12 times. ... Jonathan Taylor rushed 21 times for 71 yards and had three receptions for 20 yards. ... Michael Pittman Jr. had eight catches for 72 yards and rookie Alec Pierce caught three passes for 61 yards, including a key first down on Indy's final drive.