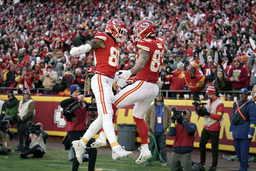 Rather than slow down the Chiefs, the questionable hit infuriated them.

Mahomes threw for 331 yards with touchdown passes to four different receivers, and the Kansas City offense piled up nearly 500 yards despite three turnovers in a 27-17 victory Sunday.

"My reaction, I was angry. I was kind of mad," said Chiefs wide receiver Kadarius Toney, who had one of the touchdown catches. "I don't like no dirty plays. I felt like it kind of gave the team a boost, gave us something to really put us on our back. It gave us something to play for, you could say."

Toney, who was acquired a couple of week ago from the Giants, had 33 yards rushing to go with four catches for 57 yards and his first NFL touchdown reception. Travis Kelce, Marquez Valdes-Scantling and Noah Gray also had touchdown catches, and Isiah Pacheco ran for 82 yards as the Chiefs (7-2) beat the Jaguars (3-7) for the sixth straight time. Kansas City took over the best record in the AFC.

"They gave us all we could handle," Chiefs coach Andy Reid said, "and it wound up being a good game at the end."

Trevor Lawrence threw for 259 yards and two touchdowns, both to Christian Kirk, who finished with nine catches for 105 yards for the Jaguars. Zay Jones also had eight catches for 68 yards while Travis Etienne ran for 45 yards.

"It's tough to win games in general when you don't take advantage of opportunities, especially against a really good team," Lawrence said. "Too many missed opportunities early. We still had our chances at the end, but we didn't make the plays."

The Jaguars became the first team in five years to recover an onside kick to open the game, but their offense squandered the opportunity - and several more. They punted five times and missed a field goal on their first six possessions.

The Chiefs had no such trouble reaching the end zone.

Mahomes, trying to become the third quarterback in NFL history with three straight 400-yard passing games, had 191 by halftime. That included the first NFL touchdown reception for Toney, the injury-prone former first-round draft pick who the Chiefs acquired in a trade with the Giants a couple of weeks ago.

"It just felt electric," Toney said. "I was too close to the sideline when I caught it, and I was just excited. I was like, `Oh, I got to get in there, somehow, some way.' But it was electric."

Later in the half, Smith-Schuster was hit by Cisco while catching a pass over the middle, leaving his hands momentarily frozen in a scene reminiscent of the concussion sustained by Dolphins quarterback Tua Tagovailoa earlier this season.

Officials initially threw a flag for the helmet-to-helmet hit on a defenseless receiver, but referee Brad Rogers said that the officials determined Cisco was leading with his shoulder and picked up the flag.

"He was in a defenseless posture," Rogers said, "but they didn't feel that there was any use-of-helmet foul on that."

That explanation didn't sit well with the Chiefs, who had to help Smith-Schuster walk off the field.

"That's what I tried to explain to the officials there: Guys don't get hit in the shoulder and lay around like that, right there," Reid said. "Something around the head was involved. That's why the rules are put in, to avoid that kind of thing."

The Jaguars finally scored on Kirk's catch with 11 seconds to go, then had a chance to add points when Chiefs tight end Jody Fortson inexplicably fumbled the kickoff return. But after a quick completion set up the 41-yard field goal try, Jaguars kicker Riley Patterson yanked his second attempt of the half wide left.

Jacksonville tried to get back into the game after halftime with a plodding drive that consumed nearly 10 minutes, but it fizzled out in the red zone and only resulted in a field goal to make it 20-10.

As so often happens, Kansas City answered with a 75-yard drive that ended in Kelce's touchdown reception.

It was his eighth TD catch of the season and the 65th of Kelce's career, moving him into second in Chiefs history. It also gave Mahomes his 16th game with at least four TD passes, the ninth most by a quarterback since at least 1950.

The Jaguars trimmed their deficit to 27-17 with 5 1/2 minutes to go, when Lawrence converted on fourth down with a pass to Jones, then hit Kirk almost entirely uncovered from 19 yards out for the touchdown.

Rather than try another onside kick, though, the Jaguars kicked deep and Kansas City ran out the clock.

"We talked about the missed opportunities," Jaguars coach Doug Pederson said. "When you play great football teams, and the Chiefs are one of those teams, you've got to capitalize."

Chiefs WR Mecole Hardman (abdominal) was inactive after scoring five TDs in his past three games. CB Chris Lammons was placed in the concussion protocol after taking a hit on punt coverage in the first half. RT Andrew Wylie left in the first half with a left elbow injury and did not return.

The Jaguars are off next week before playing the Ravens on Nov. 27.

The Chiefs visit the Chargers next Sunday night.