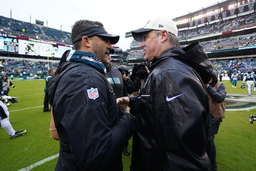 PHILADELPHIA (AP) Haason Reddick split his family's loyalties over his first five seasons. The New Jersey native and former Temple standout always had his parents and friends rooting for him - and for teams that weren't the hometown Philadelphia Eagles.

Reddick closed that fissure when the linebacker signed a free-agent deal with the Birds. Then he played his best homecoming game yet: two sacks, two fumble recoveries in the rain, and one big role in keeping the Eagles undefeated.

"To be able to be home, where I grew up at, it's a lovely thing," Reddick said.

Miles Sanders ran for 134 yards and two touchdowns, Jalen Hurts threw for 204 yards and ran for a score and the Eagles spoiled former coach Doug Pederson's return to Philadelphia with a 29-21 win over the Jacksonville Jaguars on Sunday.

Sanders led an Eagles (4-0) offense that rushed for 210 yards against one of the tightest run defenses in the league.

Trevor Lawrence threw for 174 yards and two touchdowns to Jamal Agnew. Lawrence was strip-sacked on the final drive of the game that sealed the win for the Eagles. It was one of four lost fumbles for the second-year quarterback.

Reddick and the Eagles defense had their fill of harassing the the 2021 No. 1 draft pick.

Pederson, who coached the Eagles to a Super Bowl 52 victory over New England, received a standing ovation from fans that braved a rainy, windy Sunday when he was introduced before the game. The camera cut to a shot on the big screens of the 2017 World Champions banner that hangs from the above the top deck at Lincoln Financial Field. Pederson mingled with some of his former players on the field before the game and was warmly greeted by stadium employees when he walked into the stadium.

"It was a great crowd, great welcome," Pederson said.

Pederson, who already had a statue of himself and former QB Nick Foles erected outside the Linc, seems to have the Jaguars (2-2) at least motoring in the right direction.

Nick Sirianni, Pederson's replacement, has the Eagles playing like a team that might have to make room in the rafters for more banners.

The Eagles shook off an abysmal start - Hurts had a pass intercepted by Andre Cisco and returned 59 yards for a TD - and a 14-0 hole after the first quarter before they started playing like the lone undefeated team in the NFL.

On the first drive of the second quarter, Lawrence lost his grip on the wet ball as he scrambled on fourth down and fumbled. Fletcher Cox recovered, and the Eagles got to work.

Hurts had a 10-yard TD pass wiped out on a pass interference call that pushed them back to the 20. No problem for Hurts, playing like an early MVP candidate. He ran virtually untouched up the middle, took a crushing hit at the goal line and powered through for a touchdown. It was his fourth rushing TD of the season.

Sanders tied it on a 10-yard TD run, part of his 58-yard effort in the first half. His 58 yards stood out against a Jaguars defense that had allowed a league-low 55 yards rushing a game.

But it quickly turned into one of those days for Jacksonville.

Lawrence, who threw a 4-yard TD pass to Agnew in the first quarter, fumbled the snap late in the second quarter and the ball was recovered by Reddick. Lawrence's turnover again led to an Eagles score, the one for the lead, for good.

But it was Sirianni's faith in Hurts that got them ahead. On fourth-and-1 at the Jacksonville 12, Hurts squeezed 2 yards on a sneak. It was the third fourth-down conversion of the game and set up Kenneth Gainwell's 10-yard rushing score. Jake Elliott missed the extra point and the Eagles led 20-14.

Reddick knew his fans - and the Eagles diehards - in Camden, New Jersey, were going wild.

Elliott limped on the field, kicked a 28-yard field goal in the third for a 23-14 lead, and gingerly ran off in the third. Sanders had a 5-yard TD run in the fourth.

18. That's the number of consecutive losses for Jacksonville against NFC teams. The franchise's most recent NFC road victory came in the 2018 season opener at the New York Giants. It's the longest intra-conference losing streak in NFL history.

Sirianni and some players wore Roxborough High School shirts in support of the school after a 14-year-old youth was killed and four other students wounded in a shooting near the northwest Philadelphia high school athletic field.