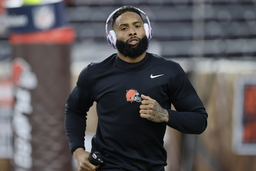 CLEVELAND (AP) Broncos quarterback Teddy Bridgewater and Browns wide receiver Odell Beckham Jr. are both active and will play Thursday night despite being slowed by injuries.

Bridgewater was listed as questionable this week with a foot injury sustained last week against Las Vegas when he got stepped on by a teammate. A quadriceps injury was added for Bridgewater to the Broncos' final injury report Wednesday.

Beckham was questionable after injuring his right shoulder last week in a loss to Arizona. He didn't practice this week.

Quarterback Baker Mayfield is out with a left shoulder injury, ending his streak of 53 consecutive starts and raising questions about his health for the remainder of the season. Case Keenum will start in his place.

Mayfield has a torn labrum in his non-throwing shoulder and is hoping rest will reduce the inflammation and allow him to return on Oct. 31 against Pittsburgh.

Cleveland also is without running backs Nick Chubb and Kareem Hunt due to calf injuries. Hunt is on injured reserve and will be sidelined at least two more games.

Browns starting right tackle Jack Conklin will miss his second game in a row with a knee injury. Left tackle Jedrick Wills Jr. is back after missing the past two games with an ankle sprain suffered in Week 1.

The beat-up Browns did get some good news as wide receiver Jarvis Landry was activated from injured reserve hours before the game after he sat out four weeks with a sprained medial collateral ligament.

Landry is considered the heart and soul of Cleveland's team. His return will give Keenum, who is making his first start since 2019 with Washington, a needed playmaker and bring comfort to coach Kevin Stefanski.