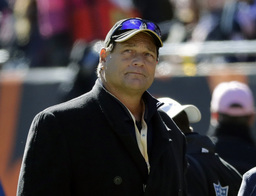 WINFIELD, Ind. (AP) Former Chicago Bears defensive lineman Dan Hampton, who was elected to the Pro Football Hall of Fame in 2002, has been arrested in Indiana for allegedly driving a vehicle while drunk.

The Lake County Sheriff's Office in Indiana said Hampton was arrested Nov. 20 on a charge of operating a vehicle while intoxicated in Winfield, where he lives. Winfield is about 50 miles (80.47 kilometers) from Chicago.

Hampton bonded out of jail the next morning after bail was set at $25,000.

Hampton, 64, played for the Bears from 1979, when was drafted with the fourth overall pick, until 1990. He was a member of the Bears' Super Bowl-winning team following the 1985 season.

Hampton played in college at Arkansas, where he was a two-time Southwestern All-Conference selection and Defensive Player of the year in his final season.

After retiring as a player, he worked as a TV and radio analyst, including as a host of the "The Hamp & O'B Show" on Chicago's WGN Radio.

Messages left Sunday for Hampton at the station were not immediately returned. A listed phone number for him could not be located Sunday.