No ending: Garrett pushing DE Clowney to re-sign with Browns 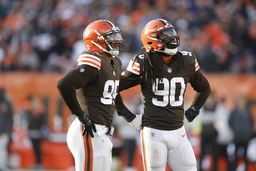 CLEVELAND (AP) Myles Garrett has enjoyed chasing quarterbacks and trying to wreck games alongside Jadeveon Clowney this season. He'd love to do it again.

"I want him here," Garrett said.

And what Garrett wants, he usually gets.

For all that went wrong with the Browns during a disappointing season, one thing worked as well - or better - than planned: the pairing of Garrett and Clowney, fellow No. 1 overall picks, disruptive forces and freakish athletes.

Garrett is finishing his best season as a pro (15 sacks heading into Sunday's finale against Cincinnati) and credits some of his success to playing up front with Clowney, who signed a one-year, $8 million free agent deal - with $2 million more in incentives - in April with Cleveland, his fourth team in four seasons.

And now that he's teammates with Clowney, Garrett wants their partnership to continue.

Last week, Garrett said he would make a strong pitch to Clowney about staying, and he said Friday that has happened.

"A couple times," he said. "He had two sacks last game. He was disruptive. I feel he's disruptive every time he's out there, especially when we're out there together and they can't just key in on just one of us.

"So the guy's hitting his stride and he has a lot of football left and he doesn't know that."

Clowney has said he's open to re-signing with the Browns (7-9), but there haven't been any formal talks with the team. He's scheduled to become a free agent in March.

And now that the Browns have had a taste of Garrett and Clowney together, it would be surprising if they didn't try to keep it that way.

With Cleveland, the 28-year-old Clowney has seven sacks, his most since 2018 with Houston. He also has been healthy, playing in 13 games and missing just two after testing positive for COVID-19.

He also has had some of those dominating moments that seemed too infrequent over the past few seasons.

Clowney said last week he has enjoyed everything Cleveland's had to offer.

"It's been one of the fastest seasons because of the guys I've played with," he said. "Great group of guys, fun group, coaching staff's been laid back and everything's been going pretty smooth. I enjoyed my time, enjoyed this year so far. Looking forward to see what happens next year in the future for me."

Browns coach Kevin Stefanski said Clowney has not only meshed well with Garrett, but he's blended in nicely with a defensive line that also added tackle Malik Jackson and end Takk McKinley.

"Great camaraderie amongst that group," he said. "Malik Jackson is right in the middle of that. That group really practiced hard, just watching them go through their individuals, the amount of energy and effort that they use out there on the practice field.

"And then they play hard during the game. So Myles and Jadeveon and how they play, how they pressure the quarterback, attack the run, those type of things are very indicative of the entire position group."

When Clowney and Garrett are lined up at opposite ends, it forces offenses into the uncomfortable position of accounting for each of them.

If Garrett is double- or triple-teamed (as has been the case at times), that leaves Clowney free to beat his man and get to the QB - and vice versa.

"It does work both ways," Stefanski said. "It's hard as an offense to give attention to multiple players. You have to make some decisions in terms of how you're going to do that, whether you're sliding a line one way each time or you're putting a tight end or a running back over on this side each time.

"So the more guys that you have on defense that get the offense's attention certainly plays to the advantage of those players."

NOTES: Clowney (neck/shoulder) was limited in practice Friday and his status for Sunday remains unclear. RB Nick Chubb (chest/ribs) is also a question mark. Stefanski didn't rule out any players, saying, "I would expect if guys can play, they will play."