Kicker's lawsuit could shed light on Meyer's time with Jags 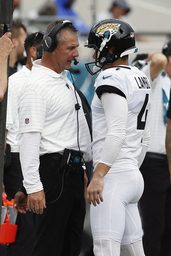 Lambo's attorney is seeking a host of records pertaining to Meyer's time with the team, including "any documentation whatsoever of abusive or toxic workplace behavior under Meyer's leadership and any investigations into these allegations."

Lambo filed a lawsuit Monday in the Fourth Judicial Circuit Court in Duval County seeking damages in excess of $30,000 for emotional distress and reputational harm caused by Meyer.

The Jaguars fired Meyer on Dec. 15, hours after the Tampa Bay Times reported Meyer had kicked Lambo during a practice months earlier. Meyer was fired with cause, although the team insists Lambo's accusation had nothing to do with owner Shad Khan's decision to part with the longtime college coach.

Lambo, the fourth-most accurate kicker in NFL history, missed a field-goal attempt in each of Jacksonville's first two preseason games. In a practice before the final exhibition game in August, Lambo says he was stretching when Meyer approached him, kicked him in the leg and said, "Hey (expletive), make your (expletive) kicks!"

Lambo says he told Meyer to never strike him again, but Meyer responded with, "I'm the head ball coach. I'll kick you whenever the (expletive) I want."

Lambo's lawsuit includes a request for a jury trial and a lengthy list of discovery requests to the Jaguars:

-Documentation pertaining to an internal investigation into Lambo's objection about Meyer's conduct.

-Documentation pertaining to other investigations into Meyer's workplace behavior in 2021 or 2022.

-Documentation showing efforts by the Jaguars to inform the NFL or the NFL Players Association about Meyer's workplace behavior.

-Text messages, emails, notes, voicemails and audio/video footage regarding Meyer's response to Lambo's initial complaint about being kicked and berated at practice.

-Text messages, emails, notes, voicemails and audio/video footage regarding interactions between Meyer and Lambo after the player's complaint.

-Documentation pertaining to Lambo's position on the team in 2021 and his termination.

-Documentation of other instances of objectionable, abusive, violent or hostile actions by Meyer with respect to other employees, coaches and players.

-Documentation regarding any communication between Jaguars management employees pertaining to reports made by other employees of unprofessional, bullying, abusive or toxic behavior by Meyer in the workplace.

-Audio or video footage or documentation of any tirades, profanity or outbursts by Meyer toward coaches, players or employees in 2021.

-Documentation of efforts by Jaguars management to counsel, correct or otherwise address Meyer's workplace behavior in 2021.