Buck, Aikman excited about 'starting over' with ESPN 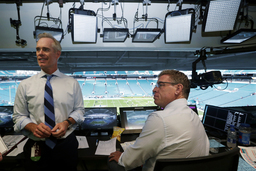 It's been two months since Joe Buck jumped from Fox to ESPN. It wasn't until Monday that the gravity of moving into the "Monday Night Football" booth hit him.

Buck and Troy Aikman made their first trips to ESPN headquarters in Bristol, Connecticut, to meet with executives and future co-workers who are preparing for the upcoming season.

"It literally dropped out of the sky. The more I get around it, Troy and I were just blown away. We were in a conference room an hour ago with 20-plus people from all different parts of the support staff for `Monday Night Football,' and it was overwhelming. I actually got emotional talking about it," Buck said Monday in his first comments since ESPN signed him and Aikman in March.

Aikman had considered pairing Thursday night games on Amazon with a reduced Fox schedule that would allow him to keep working the playoffs and Super Bowl. As trying to put that together became more challenging, ESPN started talking to the Hall of Fame quarterback about moving into the Monday night booth.

Aikman said the possibility of coming to ESPN - where he gets to call prime-time and playoff games and stays in the Super Bowl rotation - didn't crystalize until after this year's Super Bowl.

"This is an opportunity with ESPN that I'm really excited about," Aikman said. "I mean, like Joe said, we've been doing it for so long one way. To see how someone else does it and to work with different people, I feel like it's 2001 again. And kind of starting over my broadcasting career, and it probably comes at a really good time for me personally and probably for Joe, as well."

Once ESPN landed Aikman, conversations began about Buck joining him even though Buck's contract at Fox still had a year remaining. Buck said the parting was amicable, reiterating what Fox said a couple of months ago.

"I think they understood how it was such a great fit in my life to be selfish and personal about it," said Buck, who will make his ESPN debut Thursday when he hosts an alternate telecast of the PGA Championship. "I had a long talk with a lot of people, and the conversation I had with (former Fox Sports president) David Hill right at the end of it was what really sealed it. He said to me, `You will be nervous before your first game, and when was the last time you were really nervous before your first time? These are opportunities, and you need to take it if you can get it.' It couldn't have worked out any better for me and for my family."

Buck and Aikman have been working together since 2002 when they became Fox's top crew. They will match Pat Summerall and John Madden for the longest NFL booth pairing at 21 seasons when Russell Wilson and the Denver Broncos visit Wilson's former team, the Seattle Seahawks, on Sept. 12.

"We sat down towards the end of the season to sort of think about where we were going. I think we were challenged to say what's your pie in the sky, and I'm now sitting next to the pie in the sky," said Stephanie Druley, ESPN's head of event and studio production. "Plan for the best, and yeah, my answer is yes, we have the best booth."

Buck was happy that Joe Davis (baseball) and Kevin Burkhardt (NFL) were promoted to the top broadcast teams at Fox. As for future Fox top analyst Tom Brady, Aikman thinks he will be able to make the transition.

"Tom has won at everything he's done in life, and there's no reason to think that he won't win at this, as well," Aikman said. "The reason I believe that he's going to be good is because he's going to work. He's a guy, as we know, he's the reason why he's been playing as long as he has. There's a reason why he's won seven Super Bowls, and it's because he doesn't take any shortcuts, and he's not going to in broadcasting."