QB Ryan challenges Colts to keep up with quick-paced tempo 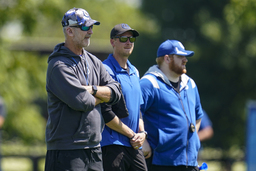 Now, he's trying to do it all over again - in Indianapolis.

For the first time since his rookie season, Ryan is learning a new playbook at a new training camp facility and developing a new routine. After just two days of workouts, the Colts couldn't be more impressed with the results.

"When you've got a guy with Matt's experience you can kind of say 'Hey, here's what we want but trust your instincts. If you see it, call it, don't flinch, do what you've done your whole career,'" Colts coach Frank Reich said after practice Thursday. "It's a mentality, it's a confidence, it's `we've got to get up and play'. We're dictating the tempo from the huddle to the call and we're going."

This is what Reich and general manager Chris Ballard anticipated when they traded a third-round pick to Atlanta for the 37-year-old quarterback in March.

The Falcons were rebuilding, making the league's 2016 MVP and the best quarterback in franchise history suddenly available.

Indianapolis, meanwhile, needed someone who could add stability and leadership after using five opening day starters in five seasons and then missing last season's playoffs by losing its final two games.

Ryan came with a strong resume that included four Pro Bowl selections, one Super Bowl appearance and top-10 rankings on the NFL's career list for yards passing (59,735) and touchdown passes (367).

But the game tape also convinced Reich and Ballard that Ryan was still in command, still playing at an elite level and still able to make a difference on a young team.

"Whenever he breaks a huddle, he's `hurry up, get to the line, get to the line,'" left tackle Matt Pryor said. "To have a dominant offense, you want the offense getting to the line quick cause then the defenses are like, `We've got to hurry up,' and maybe that'll throw them off a little bit."

The first part of Ryan's grand plan began in April when he won over teammates and coaches by quickly mastering the offense, adding confidence and humility to the locker room and building relationships.

Ryan's progression continued through the summer as he worked with other Colts players outside from the team complex. Through it all, he convinced everyone, he was the right man for the job.

"Whatever he's about to say, everyone's tuned in because you know it's going to be nothing but beneficial," defending NFL rushing champ Jonathan Taylor said in the spring. "So just having that leadership, that kind of person in the building. Being able to hear and learn from him and see how detailed he is, it makes you want to be that detailed."

It's been more of the same since the Colts reported to Westfield, Indiana, a northwestern suburb of Indy on Tuesday.

One key difference: Indy got in all of its scheduled offseason work for the first time in three years.

Another is Ryan's ability to adapt. Indy opened camp with four players, including three-time Pro Bowl linebacker Shaquille Leonard, on the physically unable to perform list following back surgery in June. Leonard told reporters Tuesday he wanted to be referred to by his middle name instead of his first name, Darius.

Since then, three players have been activated - though receiver Michael Strachan remains out. Indy also signed two receivers Tuesday.

But it hasn't slowed down Ryan.

While one fan tried to catch his attention by shouting "Iceman" on Thursday, Pryor and defensive end Yannick Ngakoue challenged themselves to keep up with Ryan.

"Can't waste any time and that's one of the messages for young guys is you can't wait," Ryan said. "That's one of the keys in training camp. One of the most difficult things is to stay mentally sharp day in and day out when it's the same thing over and over and over. The good teams, the teams that develop this time of the year are the ones that can do that."

So Ryan intends to keep the offense on its toes, the defense on its heels and fans entertained with the kind of speedy pace Peyton Manning would embrace.

"We had the same number of plays we've had in the past, but we actually finished 10 minutes earlier both days. That's because the quarterback is pushing the tempo," Reich said. "It's unbelievable. We've never practiced that fast."