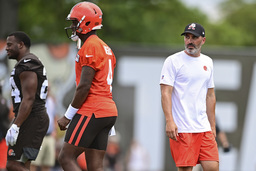 CLEVELAND (AP) Deshaun Watson's debut for the Browns is tentative and subject to change.

The same is true for his first season in Cleveland.

Watson is scheduled to start the exhibition opener - his first game action since 2020 - at Jacksonville on Friday while the quarterback waits to see if the NFL succeeds in keeping him off the field for the entire season.

The three-time Pro Bowler is facing a potential year-long suspension and fine from the league for alleged sexual misconduct against two dozen women while he played for the Houston Texans.

Last week, an independent arbitrator suspended Watson for six games, but the league wasn't satisfied with the decision, appealed and is h oping for a much lengthier punishment as well as a significant fine and that he undergo treatment before being considered for reinstatement.

That decision is expected soon.

In the meantime, the Browns are planning to see Watson play in a game. They're not sure when they might get to again.

For now, Watson's scheduled appearance against the Jaguars will be his first in a game since Jan. 3, 2021, his final one with the Texans.

The 26-year-old Watson sat out last season after demanding a trade and before he was accused of assault and harassment by the women during massage therapy sessions he scheduled on Instagram.

Watson has denied any wrongdoing. Two separate grand juries in Texas declined to indict him and he settled 23 of 24 civil lawsuits.

The Browns decided to move on from 2018 No. 1 overall pick Baker Mayfield, traded three first-round picks to the Texans and signed Watson to a five-year, $230 million contract in March despite his legal entanglement.

Browns coach Kevin Stefanski plans to play Watson and "most" of Cleveland's starters against the Jaguars. The team did not get any more specific about Stefanski's plans before flying to Florida.

Of course, it's still possible Watson won't play against the Jaguars.

Watson and the Browns thought he would only miss six games after league disciplinary officer Sue L. Robinson, a retired federal judge ruled the quarterback violated the league's personal conduct policy. She also mandated that he schedule future massages to only team-approved therapists for the rest of his career.

However, the league, which has been pushing for an indefinite suspension and fine, felt Robinson's penalty was too light and appealed on Aug. 3.

Watson's playing future is now being decided by Peter C. Harvey, appointed by Commissioner Roger Goodell to handle the appeal. Harvey's a former New Jersey Attorney General who has arbitrated other league cases and is a member of the NFL's Diversity Advisory Committee.

There is no timeframe on a decision from Harvey.

At the owner's meetings on Tuesday, Goodell said the league's appeal was warranted based on the league's own investigation and Robinson's ruling.

"Because we've seen the evidence," Goodell told reporters. "She was very clear about the evidence. She reinforced the evidence, that there was multiple violations here and they were egregious, and that it was predatory behavior."

Robinson found that the league proved its case that Watson violated three provisions of the conduct policy: sexual assault as defined by the NFL, posing a genuine danger to the safety and well-being of another and undermining or putting at the league's integrity at risk.

Watson has taken most of the snaps during training camp. The Browns have planned to start veteran Jacoby Brissett while Watson is out, but the team could explore bringing in anther QB if Watson is suspended for double-digit games or longer.

Stefanski had the Browns travel two days early for their preseason opener because he has undisclosed team bonding activities planned.