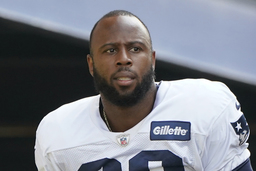 White won three Super Bowls in eight seasons - all with the Patriots.

"This chapter has been one that I will cherish. I look forward to what is next," White wrote on Instagram.

White set Super Bowl records for points scored in a game (20) and receptions (14) as the Patriots rallied from a 28-3 third-quarter deficit to beat the Falcons 34-28 on Feb. 5, 2017, the biggest comeback in Super Bowl history.

The 30-year-old White was trying to work his way back from hip surgery that abruptly ended his 2021 season. He dislocated the hip during the Patriots' Week 3 matchup with New Orleans.

White also struggled in 2020 while he was dealing with the aftermath of his father's death and his mother's severe injury in a car crash.

He spent seven months rehabilitating from the hip surgery before signing a new two-year deal in March to remain in New England. But he began training camp on the physically unable to perform list and was never cleared to resume full-contact practices.

Though undersized at 5-foot-10 and 200 pounds when he was selected out of Wisconsin in the fourth-round of 2014 draft, by his second season he had become the Patriots' go-to receiver out of the backfield - particularly on third down.

He appeared in 95 regular-season games and had 1,278 rushing yards on 319 attempts with 11 touchdowns. As a receiver his numbers were more impressive: 381 catches for 3,278 yards and 25 TDs. He also appeared in 12 playoff games, scoring eight TDs (five rushing, three receiving).

In a statement, Patriots coach Bill Belichick called White "one of the most respected, best team players I have ever coached."

"James defines the term consummate professional," Belichick said. "His dependability, consistency, unselfishness and performance under pressure are elite. Combining great intelligence, quickness and elusiveness, James was a perfect fit for our pass offense. While soft-spoken, he brought exceptional leadership and competitive toughness to the team."

Many of White's former teammates sent him well wishes on social media.

"Teammate, champion, football player through and through. Congrats on the perfect career," former Patriots quarterback Top Brady posted on Instagram.

"My brother on and off the field. Third-and-James White," said retired Patriots receiver Julian Edelman.

As much as White became emblematic of the Patriots' culture, he will be remembered most for how he helped rally New England to the franchise's fifth of six Super Bowl titles.

New England trailed 21-3 at halftime, and teammates said a speech by White in the locker room helped spark the comeback. With the Patriots down by 25 points, White scored two TDs and had a 2-point conversion run to send the game to overtime. He then ran for the game-ending score in the extra period.