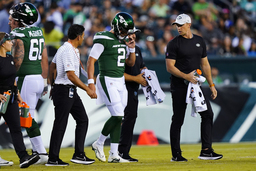 Wilson is expected to miss two to four weeks with a bone bruise and meniscus tear in his right knee, according to a person with knowledge of the injury. The person told The Associated Press the timeline for how long Wilson is sidelined will be determined by an arthroscopic procedure to repair the meniscus - the schedule for which is pending a second medical opinion.

It was initially feared that Wilson suffered a serious - and potentially season-ending - knee injury during the second offensive series of New York's 24-21 preseason-opening win at Philadelphia on Friday night.

Tests after the game indicated the ACL was intact, and an MRI on Saturday morning revealed the exact nature of the injury. The person spoke to the AP on condition of anonymity because the team hadn't announced details.

The New York Post first reported Wilson was diagnosed with a bone bruise and meniscus tear that needs to be trimmed and not fully repaired. While Wilson and the Jets remain optimistic, they won't know the full scope of the injury - and whether recovery could go beyond two to four weeks - until doctors operate on the quarterback's knee.

There's still a chance Wilson could be ready to play in the season opener against Baltimore on Sept. 11. If not, veteran Joe Flacco would likely start in Wilson's place against his former team.

After going back to pass with 4:29 left in the first quarter, Wilson was flushed out of the pocket and scrambled to his right for 7 yards, but went down when he tried to juke past Philadelphia's Nakobe Dean. He appeared to injure his knee when planting to cut on Philadelphia's grass field.

Wilson was down for several minutes as doctors and trainers checked on him. He walked gingerly to the sideline and then to the locker room.

"He's in good spirits," coach Robert Saleh said of Wilson after the game. "He's fine, a little frustrated, obviously, but he's as good as you can be in this situation."

And he probably feels quite a bit better knowing his season isn't already over before it even started.

Wilson's progress in his second NFL season is the primary focus this year for the Jets, who took the former BYU star with the No. 2 overall pick last year. Wilson had a down-and-up season that began with struggles and then a sprained PCL in the back of the same right knee, sidelining him for four games. But he came back and was solid down the stretch, not throwing an interception in any of his final five games.

Wilson finished his rookie year with nine touchdown passes and 11 interceptions. The Jets added several playmaking pieces around their young quarterback during the offseason - including wide receiver Garrett Wilson, tight ends C.J. Uzomah and Tyler Conklin, running back Breece Hall - and he's had a solid training camp this summer.