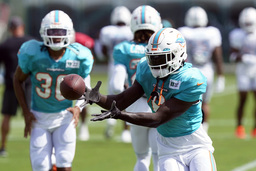 During the fourth quarter of the Dolphins' 26-24 home win Saturday, Buccaneers backup quarterback Kyle Trask threw a pass to receiver Deven Thompkins. Williams made the tackle on the play but immediately grabbed his left knee after falling to the ground.

"You hate to see an injury like that for a guy that's been working as diligently as Trill has," McDaniel told reporters Sunday.

It isn't yet clear whether Williams will be placed on the team's injured reserve list. When asked about it Sunday afternoon, McDaniel was hesitant to say if he would.

"You're careful not to get ahead of yourself with all the medical opinions that are currently in that process right now," McDaniel said, "but it does seem severe, and I wouldn't be completely surprised if that was the case."

Either way, the Dolphins may look to sign a free agent to add depth and experience at cornerback.

Williams, a second-year player out of Syracuse, was undrafted in 2021 and signed with the New Orleans Saints as a free agent. Williams later joined the Dolphins off waivers.

On a team looking for backup cornerback depth, Williams had performed well in training camp, putting himself in position to be a solid option behind Xavien Howard, Nik Needham and Byron Jones. Jones, who had surgery on his lower left leg in March, remains on the physically unable to perform list.

"It's one of the hard things about the profession that I really struggle with when I see that happen to someone," McDaniel said. "He's proven time and time again that things of that nature won't keep him back over the long haul. The challenge is to make that thing happen for a good reason and come back stronger and better. But it's something that hurt the hearts of the whole team, myself included."

As is typical in the preseason, few of the Dolphins' starters stepped onto the field, including quarterback Tua Tagovailoa, Tyreek Hill - whom the team traded for earlier this year - veteran cornerback Howard and receiver Jaylen Waddle.