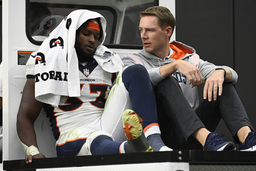 ENGLEWOOD, Colo. (AP) Broncos standout running back Javonte Williams is out for the year after tearing his right ACL in Denver's 32-23 loss to the Las Vegas Raiders, and pass rusher Randy Gregory needs knee surgery and will miss multiple weeks.

Also, QB Russell Wilson has a sore right throwing shoulder and he was hypothetically listed as limited on the players' day off Monday.

"Yeah, he got dinged up in the game and you know he's just a little sore today," coach Nathaniel Hackett said. "We're just gonna be sure to take care of him and give him treatment throughout the week."

Hackett said as of now, Wilson will play Thursday night against the Colts.

As for Williams and Gregory, "both of those guys are obviously very important to our team," Hackett said. "Losing Javonte is so unfortunate, a dynamic player in this league. Randy, same thing. Having to have him miss some time right now is hard because he's been a great force on the team."

Hackett said Gregory, who got hurt chasing Derek Carr with about six minutes left in the game, will have arthroscopic surgery soon and IR is a possibility. The good news is an MRI showed his ACL was intact.

Williams got hurt on the first play of the third quarter Sunday when he took the handoff from Wilson and was tackled behind the line of scrimmage. He didn't put any weight on his right leg as he was helped off the field after staying down for an extended time.

Williams earned the starting job this season after sharing backfield duties with Melvin Gordon his rookie year in 2021.

Last year, Williams rushed for 903 yards and four TDs and caught 43 passes for 316 yards and three TDs, making him one of the top running backs in the league coming into his second NFL season.

Williams' backups faired poorly Sunday when the Broncos (2-2) lost for the fifth consecutive time to the Raiders. Gordon had a fumble on his first carry that was returned for a long touchdown and Mike Boone had two critical drops and failed to pick up the blitz on a sack.

The Broncos' ability to explore the trade market for a running back is hampered by a lack of 2023 draft picks following the trade for Wilson this spring.

The Broncos' best bet with their next game coming up Thursday night at home against Indianapolis (1-2-1) would be to promote Devine Ozigbo from their practice squad.

Williams is the second key offensive starter the Broncos have lost to a season-ending knee injury. Wide receiver Tim Patrick got hurt in training camp.

"This is part of football; it's a physical game," Hackett said. "We can't deny there's certain things we can't control. And as a team we're going to band together and we're going to step it up and we're going to get better. And whoever has the opportunity to go in has to embrace it and be excited for it and play the best they've ever played."