Browns hope to go '1-0' when they visit hot Dolphins 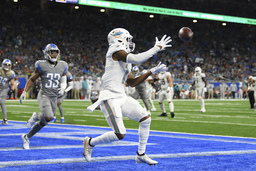 Being involved in close contests, as his Miami Dolphins have all season, could give a team a competitive edge if they're able to learn from them.

"It kind of snowballs for teams where you can be in tight games consecutively," the first-year Dolphins coach said. "And you can find yourself with the same result until you get yourself out of it either way."

The Dolphins have played in five games decided by a touchdown or less. They've won them all. On Sunday, Miami will host the Cleveland Browns, who have struggled to win close games.

Despite having the NFL's fourth-ranked offense behind a dominant rushing attack, the Browns have lost four of the five games they've played that were decided by a field goal or less. Now, they're on the outside of the AFC playoff picture with nine games left.

"For us, it really does go back to a one-game season," Browns coach Kevin Stefanski said. "One game, this one is important, the next one is going to be important and so on. For us, we totally understand where we are, but we have to focus on going 1-0 down against a very, very good football team on the road."

The Browns have only been in three double-digit games. The most recent was their surprising 32-13 blowout of the Bengals.

"I think we played a full 60-minute game," quarterback Jacoby Brissett said. "It was our first time, I think, of the year ending the game taking the knee. That is huge to be able to do that in the NFL."

McDaniel said part of Miami's late-game success stems from players not trying to do everything themselves when they get into tight situations, which is learned through trial and error.

"It's just another down, regardless of if it's the game to win the Super Bowl or just winning one game in the regular season," Holland said, "You've got to play it for what it is."

Being able to close out tight games separates a lot of the NFL's great teams.

But ideally, Holland added, the Dolphins want to show they're great by dominating their opponent every game, and "just completely nullifying an offense both mentally and physically."

Dolphins receivers Tyreek Hill and Jaylen Waddle have been extremely productive this season.

Quarterback Tua Tagovailoa pointed to McDaniel's ability to scheme guys open and tailor the offense to what players such as Hill and Waddle do best. But Hill and Waddle are also so fast that safeties have no choice but to give them a cushion, which is why they've been able to get so open over the middle of the field.

"Basically putting them in spots to utilize their skillsets," offensive coordinator Frank Smith said. "The one thing you see about our offense is that we're constantly in motion, constantly moving pieces to try and allow our guys to get in positions to attack the defense."

Climbing in stature and the Browns' record books seemingly with every carry, running back Nick Chubb is having his best season.

The three-time Pro Bowler has 841 yards rushing, and is on pace to surpass his best season - 1,494 yards in 2019 - when he finished second to Tennessee's Derrick Henry for the NFL rushing title. Cleveland hasn't had a back win the crown since Leroy Kelly in 1968.

The Dolphins gave up 252 yards on the ground to Chicago last week, and now have to deal with Cleveland's potent attack led by Chubb.

"Nick is in a league of his own, does a lot of great things," Dolphins linebacker Bradley Chubb said of his cousin. "He gets stronger as the game goes on. As you hit him more and more, he just keeps churning those legs, keeps doing what he does."

It will be a homecoming - times two - for Brissett, who was born in West Palm Beach and played for the Dolphins last season.

"I don't care," said Brissett, who posted a career-best 133.7 passer rating last week against Cincinnati. "I just want to go win. That's what my focus is. I'm not really into the other stuff."

Brissett started five games for Miami last season, going 2-3 while backing up and filling in for Tagovailoa, who has taken a big jump in 2022 and currently leads the league in passer rating.

The Dolphins are looking forward to seeing their former teammate.

"He's been playing great, so it's going to be good," Waddle said. "Jacoby's real funny so I'm excited to just chop it up. I know he's got some jokes for us, for sure."