Bears place RB Herbert on IR because of hip injury 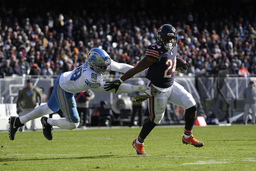 LAKE FOREST, Ill. (AP) The Chicago Bears placed running back Khalil Herbert on injured reserve because of a hip injury on Tuesday, a big setback for a team leading the NFL in rushing yards.

Herbert will miss at least four games. He was hurt returning a kickoff near the end of last week's 31-30 loss to the Detroit Lions.

Herbert is the team's second-leading rusher behind quarterback Justin Fields. He has 643 yards on 108 attempts while sharing duties with David Montgomery. He is sixth in the league at 6 yards per carry. Chicago is averaging 201.7 yards rushing, with the Baltimore Ravens second at 168.1 yards per game.

Chicago visits Atlanta on Sunday. The Bears (3-7) have lost six of seven.