Ryan eager to make most of 2nd chance as Colts starter 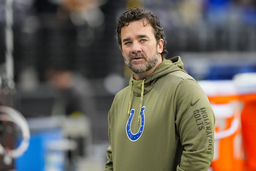 INDIANAPOLIS (AP) Matt Ryan kept playing the role - even when his first season in Indianapolis went off script.

He searched for ways to eliminate turnovers, continued rehabbing a separated throwing shoulder and offered teammates help and advice, even after he was demoted three weeks ago.

So when the Colts fired coach Frank Reich and replaced him with the unproven Jeff Saturday last week, the longtime NFL quarterback stood in front of his teammates and made an impassioned speech about how to navigate this uncharted territory.

It was as unsurprising to those inside the locker room as Ryan's response to reclaiming the starting job last Sunday.

Ryan has proven it time and again.

At age 37, he's old enough to remember working with Saturday on Pro Bowl weeks, and Ryan remains so committed to winning with these younger guys that he never stopped preparing like a starter when Reich made the switch to Sam Ehlinger.

Some aging quarterbacks with such a lengthy resume and a league MVP Award in their trophy case might have called it a career. Not Ryan.

After three straight weeks of chaos and tumult inside the Colts complex, Ryan reprised his best-known character as the unflappable, steadying leader known as "Matty Ice."

Until Oct. 31, Ryan had never endured such a stinging rebuke as a professional player. In fact, the closest thing he remembers to a benching came when Quinton Porter returned from an injury in 2005 and the two battled for the title of Boston College's starting quarterback.

"I think we constantly, as competitors, we all believe we're the best, right?" Ryan said. "When you're told we feel like someone else can do a better job, that part is hard. That's natural. Again, I think back to where I'm at in my career and I think it fires you up just as much."

Saturday said he was first impressed Thursday and that after a second strong practice Friday, he made the decision to start Ryan instead of Ehlinger - just four days after Saturday insisted Ehlinger would still be No. 1 on the depth chart.

Ehlinger acknowledged he was frustrated by the role reversal, but managed to persevere by relying on some lessons he learned from Ryan.

"I think the biggest thing is being a pro day in and day out and giving without expecting anything in return," Ehlinger said. "He did a great job of letting me know he would be available for me, so I went to him with a lot of questions, and he was great."

Ryan was even better in action.

After being sacked 24 times, taking 59 hits and logging a league-high 12 takeaways in his first seven games with Indy before the unplanned two-week break, Saturday was convinced Ryan gave Indy (4-5-1) its best hope of a midseason turnaround.

He went 21 of 28 with 222 yards, threw one touchdown pass, scored on a quarterback sneak and had his second turnover-free game this season. Ryan kept the offense in sync and when the Colts needed Ryan to improvise, he produced a career-long 39-yard run on third-and-3 to keep Indy's go-ahead touchdown drive alive.

Ryan's wife, Sarah, posted her description of the sprint on Twitter.

"Cut it back inside a bit.avoided heading towards the bench at all costs," she wrote.

While Ryan showed everyone what he's still capable of when he's upright, the biggest difference was Indy's offensive line.

Ryan had enough time to make the decisions and throws that fans remember from a prep career near Philadelphia, a college career in the Northeast and 14 years with the Atlanta Falcons. Indy's resurgent ground game helped, too, and suddenly Ryan looked like the player Indy anticipated when it made the March trade to acquire him.

This week, he and the Colts will need to replicate that performance against the Eagles (8-1) and a defense that ranks among the league's best.

Beating his hometown team in perhaps his final meeting against the Eagles wouldn't just get the Colts back to. 500 and squarely in the middle of the playoff hunt, it could help Ryan rewrite what so many though would be the final scene of his career.

"I think back to it in all situations - uncomfortable, good, bad, whatever - there is a right way and a wrong way to do things," Ryan said. "I've always just tried to do it the right way."