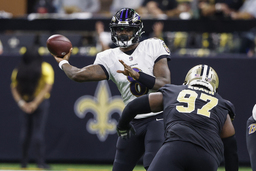 Sometimes, as a motivational technique, a player might make a point of remembering everyone at his position who was drafted ahead of him.

It doesn't seem quite that personal for Lamar Jackson.

"I was motivated when it took forever for me to get drafted. That's all," he said. "It doesn't really matter who went first, I just know my spot, what it was."

Jackson was taken 32nd in the 2018 draft by the Baltimore Ravens. That was 31 spots behind Baker Mayfield, who was picked by Cleveland back then and will face the Ravens this weekend as the quarterback of the Carolina Panthers.

In fact, two of the four quarterbacks taken ahead of Jackson are currently with Carolina. Sam Darnold, drafted third by the New York Jets, is also on the Panthers but hasn't played yet this season. By now, it's fairly obvious that the Ravens and Buffalo Bills ended up with the quarterback prizes from that draft when they took Jackson and Josh Allen.

"I remember all the coaches thundering down the hallway like a herd. I could hear them, `Boom, boom, boom!' - because we were on the other side of the building when we got Lamar," Baltimore coach John Harbaugh said. "So, everyone was excited. I remember that."

Jackson and Mayfield have faced off plenty because they were in the same division until Mayfield was traded from the Browns to the Panthers before this season. He began the season as Carolina's starter, but was sidelined with an ankle injury in Week 5. P.J. Walker replaced him, but he hurt his own ankle and Mayfield is now set to start again.

"I'm not worried about it being `my job' because I know what I am capable of and this team does as well," Mayfield said. "I am going to go out there fully confident and ready to win."

The Ravens (6-3) have won three straight and are coming off their open date. They lead the AFC North. Carolina (3-7) hasn't fared nearly as well, but the Panthers are only two games out of first place in the NFC South after beating Atlanta last week.

No Christian McCaffrey, no problem for the Panthers.

Carolina is averaging 159.5 yards per game on the ground in the four games since McCaffrey was traded to the San Francisco 49ers. They averaged 90.3 yards per game in the six games with him in the backfield.

Guard Austin Corbett said that is not a reflection on McCaffrey, but more of an indication of the team's total commitment to the running game.

"We have found an identity," Corbett said.

D'Onta Foreman has proven to be the ideal back for what interim coach Steve Wilks wants - a tough, physical back who wears down opponents.

Foreman has run for 389 yards and four touchdowns in the past four games.

Both teams have had extra time to prepare for this game. The Ravens were off last week, and Carolina played a Thursday night game.

Baltimore is 11-3 in games immediately following an open date under Harbaugh.

Mayfield said he got to know Lamar Jackson and his family a little bit in college and came away impressed - and, frankly, a little scared.

"He's a great guy and good family. Still intimidated by his mom to be honest with you," Mayfield said with a smile.

"His mom used to work him out and she told me stories for me to get ... down to Florida and go work out with him and I politely declined after a few beverages at the Heisman ceremony," Mayfield said. "But she's intimidating. There is a reason why he is so tough."

Baltimore split two games with Mayfield and the Browns last year. Mayfield threw for 247 yards and a touchdown in a 16-10 loss at Baltimore, and he passed for 190 yards with two touchdowns and an interception in a 24-22 win over the Ravens.

"I did think Baker would be a Brownie for life, so it will be a little different seeing those colors," Baltimore defensive back Marlon Humphrey said. "I thought the Lamar-Baker thing would be a long time. So, him in the baby blue and white, it's going to be different, but I'm sure he'll still be the same feisty Baker that will ... If he throws one on you, he'll let you know, so I do like that about Baker."

Wilks was the coach of the Arizona Cardinals in 2018 and had the No. 10 pick in the draft. He was part of the group that chose Josh Rosen, passing on Jackson.

"I can't even recall where we had him ranked," Wilks said. "If I did, I probably wouldn't tell you."