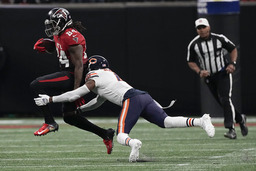 ATLANTA (AP) Cordarrelle Patterson had prepped a long time for this moment.

When it finally came, the Falcons return man tried to have a quick couple of seconds to himself but found that impossible. His teammates mobbed him too fast.

It's been a long time coming, but Patterson returned a kickoff 103 yards to become the NFL career leader with nine kick return touchdowns in Atlanta's 27-24 victory Sunday over the Chicago Bears.

Patterson, a 10-year veteran, caught the ball in the end zone, gathered a head of steam and outran the coverage up the middle. He received a key block from Troy Andersen, and Matthew Adams missed a tackle attempt when he dove at Patterson's feet. Patterson was too fast for Elijah Hicks to catch as he approached the end zone.

"I was telling some of the guys on the sideline, like, `Who is this guy?' He was like 10 yards back," said Patterson, a first-round draft pick for the Vikings in 2013 and a four-time Pro Bowl selection as a returner. "This little (guy) is fast. He did a good thing trying to, but the rest is history."

Patterson broke the record he shared with Joshua Cribbs and Leon Washington, each of whom had eight kick return TDs. He is in his second season with the Falcons and had his first return for a touchdown since 2020 with Chicago. He also returned kickoffs for scores with Minnesota and New England.

The second-quarter touchdown, coming on his seventh kickoff return this year, trimmed the Bears' lead to 17-14 and helped the Falcons force a 17-all tie at halftime.

Patterson's big moment overshadowed a fumble he lost on the previous possession that set up a Chicago touchdown. He was running down the right side on a 17-yard gain when Jaquan Brisker punched the ball out at the Atlanta 38. Jaylon Johnson picked it up all and ran 17 yards to the Falcons' 46 before Chris Lindstrom tackled him.

"Trying to be too greedy," he said. "Trying to be the spark for the team and trying to do way too much. Trying to run over people too much and not protect the ball. I know my coaches are going to give me hell when we watch the film, but I'm glad we got the win, so it'll help us."

Patterson kept pounding the line of scrimmage in the second half. Finishing with 10 carries for 52 of the Falcons' 149 yards rushing, his play was critical on Atlanta's next-to-last possession, which ended with Younghoe Koo's 53-yard field goal.

Patterson ran five times for 15 yards before converting a critical fourth-and-2 with a 6-yard run up the middle.

"We overcame some adversity, some of our own doing in the first half and kept swinging," Atlanta coach Arthur Smith said. "Really happy for CP. It's pretty cool when a guy breaks an NFL record. We obviously needed that play. It was a great team win."

The win snapped a two-game skid for the Falcons (5-6), who visit Washington next weekend.