Defense has Commanders at 6-5 and back on playoff track 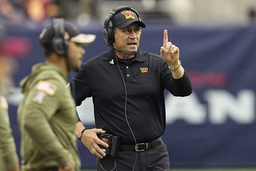 Jonathan Allen spoke up in the locker room following Ron Rivera and wanted his Washington Commanders teammates not to be too happy about beating the Houston Texans.

"When we win, sometimes it's hard to see the lesson because were excited, and I don't want to dampen the mood," Allen said as part of his speech. "We got to be better. Good win. We're going to enjoy it. Let's refocus. Let's not have to have a loss to get ourselves refocused."

Washington's defense led by Allen and fellow defensive tackle Daron Payne looks plenty focused and is the biggest reason the team improved to 6-5 and is very much in the mix for a playoff spot.

The Commanders allowed 5 total yards in the first half of their 23-10 victory Sunday and now have the sixth-ranked defense in the NFL entering Monday.

"We've just got a lot of different guys that do different things well, and everybody's playing to their strength," said cornerback Kendall Fuller, who picked off Davis Mills and returned his first interception of the season for a touchdown. "For a lot of defenses, it's not a lot of panic early in the season because you know week in, week out you'll start to get better, and you'll start to jell and stuff like that. I don't think nothing necessarily clicked for us in one week, it was we just kept on preparing, kept on knowing that things will work out and things will show for itself on Sundays."

The unit could also be getting a boost with the anticipated return of pass rusher Chase Young, who was activated off the physically unable to perform list Monday and could play as soon as Sunday against the Atlanta Falcons - 378 days since tearing the ACL in his right knee.

Coach Ron Rivera said Young will be mixed in slowly, starting with 12 to 16 snaps and slowly ramping up from there.

"He's only been doing football stuff for the last portion of 21 days, and it's three days of practice for the most part, so that's only really nine practices he's had," Rivera said Monday. "We have to slowly integrate him into it, get him more acclimated to it and when he's ready to roll, give him an opportunity to gradually increase that number of plays."

Young was the second pick in the 2020 draft, earned Defensive Rookie of the Year honors and is capable of being a major difference-maker. But Rivera is conscious of messing with success by adding Young back in.

"We have a really good mixture of guys right now that are playing really well as a group," Rivera said. "That's the last thing that anybody wants, especially Chase, is to come in and be disruptive, so we'll have to be smart, but we'll do this the right way."

Taylor Heinicke is 4-1 as the starting quarterback, and he deserves a lot of the credit he's getting.

That said, the offense is clicking in large part because of the running game, which is helping open up opportunities for Heinicke.

Washington rushed for 153 yards against Houston, which helped Heinicke throw for 191.

Allen pointed out the Commanders allowed 143 yards to the Texans after halftime and would not have beaten Philadelphia the previous week with that kind of play. Putting together a full 60-minute game is still a work in progress.

Rivera's mood is sky high. His demeanor Monday was one of the best in his tenure with Washington. He broke out his own Air Jordans to honor Heinicke and beamed about how the Commanders are playing.

"I'm excited about our potential," Rivera said. "When your guys respond the way that you hope that they would and come out and play the way they did and then sit there and say, `You know what, we could've been better,' that means a lot. It means that these young men are coming together, they're believing in each other and they're believing in what we've talked about doing."

Rookie receiver Jahan Dotson, who's coming off a hamstring injury that sidelined him for more than a month, has only one reception in each of the past two games. It's not reason to worry, but Washington took him in the first round to make an immediate impact and take pressure off Terry McLaurin and will need more of that later in the season.

Cornerback Benjamin St-Juste left the Texans game with an ankle injury. Running back J.D. McKissic is out at least four games after going on injured reserve with a neck injury. And Rivera said interior offensive lineman Wes Schweitzer has been cleared from concussion protocol.

Don't overlook the Falcons. Washington is a 4-point favorite on FanDuel Sportsbook and can't let up ahead of upcoming back-to-back games against the NFC East rival New York Giants around the bye week.