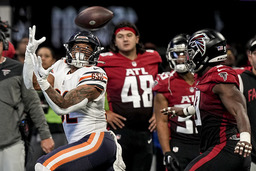 LAKE FOREST, Ill. (AP) The Chicago Bears have treated quarterback Justin Fields like another running back within their offense by letting him carry the ball repeatedly, at the risk of injury.

Now Fields is nursing a left shoulder injury and the Bears face the possibility of using backup Trevor Siemian as a starter for the first time.

"We'll see where he is on Wednesday," coach Matt Eberflus said of Fields on Monday at Halas Hall. "So, we've got time, we'll see where it is and go from there."

Eberflus wouldn't reveal the nature of the injury or severity after Fields had a postgame X-ray.

Eberflus wouldn't even say if the possibility of a season-ending injury has been ruled out.

About the only health issue he did address regarding Fields were leg cramps suffered throughout the game. The Bears decided on a Fields run to start the final drive despite his cramping legs.

"We know he's dealt with that before, because obviously he puts out a lot of energy during the game and we're gonna call our plays that we think are the best there," Eberflus said. "So that's what we did and we went with it."

Fields took a hit running toward the sideline on a play starting the final Bears possession, but stayed in the game for two more plays. One was a botched draw play when Fields had to keep it again, slid and was hit on his right side. Then came a game-sealing interception.

So much of the Bears offense has come through Fields' running in the past five weeks and it required altering the way they run numerous plays within the attack as they leaned on his legs.

Now they would need to switch back to a more conventional-style attack if Siemian is the starter against the Jets on Sunday.

"I don't think that would take that much," Eberflus said. "We would just lean on one side of the offense as opposed to leaning on the side that we've expanded to, to a certain degree. I think that would be a pretty easy transition.

"Trevor is obviously a very smart individual, a very good passer, has a great grasp of the offense. He's been here since Day 1 - high functional intelligence. So we're excited about that guy."

Siemian actually started a game for the Jets in 2019, but since then he has started only four games, all for the Saints, and lost all of them.

There just seems to be something about Thanksgiving week for the Bears and backup quarterbacks.

In 2018 they started backup Chase Daniel because of an injury to Mitchell Trubisky and won at Detroit. They won last year in Detroit on Thanksgiving when backup Andy Dalton started for Fields, who had broken ribs.

The pass defense. After they had given up 257 passing yards on average through the course of three straight games, the Bears rose up and limited Atlanta to 131 yards, their fewest allowed through the air since Week 6.

The return to health of cornerback Jaylon Johnson was a factor. They allowed just six completions of 10 yards or longer Sunday and the Falcons failed on all four third down passes while going 2 of 9 on third downs.

"We've lost a lot of close games that we should have won when it comes down to like five, six, seven plays," running back David Montgomery said. "Ultimately, we all gotta do our part. We can't have mental errors. We're not good enough to do that."

Jaquan Brisker. They rookie strong safety from Penn State made a career-high 11 tackles, including one for loss. He continues to lead the team in sacks with three and is being used more often in blitz situations.

Kicker Cairo Santos. Two weeks ago, Santos missed an extra point in a 31-30 loss to Detroit. On Sunday he missed for the first time this season on a field-goal attempt, a 56-yarder in the first half that Eberflus said was definitely within range because the kick came indoors.

Starting right guard Teven Jenkins was active for Sunday's game, but did not get on the field because of the hip injury that has kept him out of two games. Eberflus said it was a case where the second-year lineman was healthy enough to be a backup on the day, but not a starter. Jenkins was able to practice last Friday and they'll be looking for his return this week after the line allowed four sacks Sunday.

7 - Fields has seven rushing touchdowns after a 4-yarder Sunday. He has rushed for a TD in five straight games.

The Bears face the Jets at the Meadowlands on Sunday.