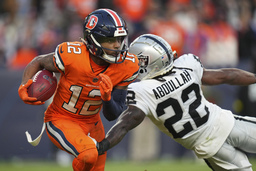 DENVER (AP) The Denver Broncos aren't finding any answers in the locker room at halftime.

After wasting an 84-yard drive heading into the break Sunday when Maxx Crosby blocked a field-goal attempt one play after punching the ball from Melvin Gordon's arms at the goal line, the Broncos went scoreless in the third quarter for the seventh time this season.

They've only managed one touchdown, one field goal and a safety in the third quarter all season.

Their latest third-quarter goose egg led to a comeback by the Las Vegas Raiders who won it 22-16 in overtime, sweeping the Broncos (3-7) for the third straight year.

The Broncos' 14.7-point scoring average is the lowest in the league, squandering a defense that's allowing an average of just 15.9 points in regulation.

With just a 19-point scoring average, the Broncos would be 9-1 atop the NFL. Instead, they're barreling toward a sixth straight losing season and seventh consecutive year out of the playoffs.

And this time there's no high draft pick awaiting them as consolation.

They traded that to Seattle in the Russell Wilson trade that isn't working out - Wilson has just seven touchdowns and appears to be pressing more every week.

Hackett hired Jerry Rosburg out of retirement in September to help him fix game management mistakes and operational miscues, and this latest move paid off immediately when Wilson drove Denver to a touchdown on its opening drive for the first time all season, a 92-yard beauty that culminated with Latavius Murray's 1-yard TD run.

They added a field goal for a 10-0 lead and were going in for the score to make it 17-7 at the half when Crosby forced the fumble by Gordon and then blocked the field goal.

"We had a chance there at the end of that first half to get some more points, and we came away with nothing," Hackett said. "It's unacceptable. We can't do that. We have to score a touchdown, at least get a field goal. We didn't come away with either, so that's frustrating."

Crosby sacked Wilson on third-and-9 on Denver's first drive after halftime and added another later in the third quarter.

The Broncos managed two field goals after halftime to go with four punts and a regulation-ending 16-second possession that went nowhere.

They never even got the ball in overtime after Davante Adams sped past cornerback Pat Surtain II for a 35-yard touchdown catch that ended it.

Neither are the Broncos.

Hackett is sticking with Kubiak as his play-caller, saying he liked the communication and operation between Kubiak with his view from the box and offensive coordinator Justin Outten on the sideline.

The makeshift offensive line. Wilson made a bad decision by throwing an incompletion on third-and-10 late in the fourth quarter, leaving Derek Carr more than enough time to tie it up in regulation. Wilson was flushed from the pocket despite the running back and tight end staying in to help block while three wide receivers ran routes.

Murray, a reliable veteran running back who's going to get a featured role in the Broncos backfield with Melvin Gordon being waived on Monday following his latest game-turning fumble.

Special teams. K Brandon McManus kept kicking off short, something he rarely does at Mile High, and it proved costliest when Ameer Abdullah returned the overtime kickoff 28 yards to the Las Vegas 33. KR Montrell Washington fumbled the second-half kickoff and the Broncos started at their 13. P Corliss Waitman has been sketchy for a month.

3 - Number of 10-0 leads the Broncos have blown this season.

A trip to face the Carolina Panthers (3-8) in a matchup of last-place teams.