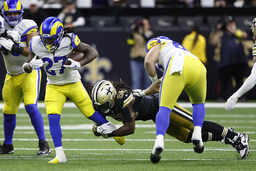 Henderson rushed for 1,742 yards and 13 touchdowns over four seasons with the Rams, who chose him in the third round in 2019. Henderson started 28 games, including seven this season, and played extensively in the Los Angeles backfield whenever he was injury-free during his career.

Henderson played just four snaps in last week's loss at New Orleans. Rams coach Sean McVay said Henderson had a minor knee injury, citing it as the reason he barely played. But Henderson is in the final year of his rookie contract before free agency, and the Rams were moving on before the final seven games of what's looking like a lost season.

Henderson has 283 yards rushing and three touchdowns this season. He is averaging 4.0 yards a carry.

He could end up replacing backup JaMycal Hasty, who has 24 yards on 13 touches since Jacksonville traded James Robinson to the New York Jets in late October and installed Etienne as the team's starter.