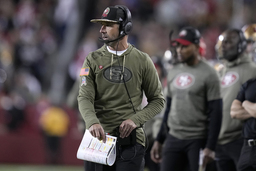 SANTA CLARA, Calif. (AP) Coach Kyle Shanahan knows it's a challenge to keep all of his playmakers involved in the San Francisco 49ers' offense after the addition of Christian McCaffrey.

Imagine how hard it is to defend a group that features McCaffrey and Elijah Mitchell at running back, receivers Deebo Samuel and Brandon Aiyuk, and versatile tight end George Kittle.

That's the task the New Orleans Saints (4-7) face Sunday when the visit the streaking Niners (6-4).

The 49ers struck that perfect balance in last week's win over Arizona with Aiyuk and Kittle each catching two TD passes, McCaffrey gaining 106 yards from scrimmage, Samuel scoring on a 39-yard TD run and Mitchell wearing down the Cardinals on the ground in the second half.

Shanahan knows that won't happen every week but was pleased to see it work out that way against Arizona.

"It was like everybody got a B-plus, A-minus because everyone did really good, but if someone ever does great then there's not enough for anyone else. It's going to take away from someone," Shanahan said. "Just to watch everyone contribute - all the receivers, the tight end, the running backs - it was just kind of cool how it worked out."

The Niners haven't allowed a point in the second half of the last three games, marking the second time in the past 30 seasons they have done that in three straight games. They also did it on the way to the Super Bowl following the 2019 season. San Francisco has allowed just 242 yards after halftime in those games for an average of only 3.1 yards per play.

"Three second-half shutouts in a row is winning football, and if we can keep that up, then with our offense we're going to be a tough team to beat," defensive end Nick Bosa said.

The Saints were without more than a half-dozen prominent players during last week's victory over the Los Angeles Rams who have tried to return to practice this week on at least a limited basis.

Cornerback Marshon Lattimore (abdomen), defensive ends Cameron Jordan (eye) and Marcus Davenport (calf), left tackle James Hurst (concussion), left guard Andrus Peat (triceps), and running back Mark Ingram (knee) all practiced on a limited basis, raising the prospect that New Orleans could get at least some of them back by Sunday.

The Saints also designated defensive back Bradley Roby to return from injured reserve, and he was at practice as well.

Those players "are obviously the guys that we were counting on this season," Allen said. "Any time you can get them back out in practice for whatever amount you're able to get them back out there brings a lift to the team."

Saints tight end Juwan Johnson began his NFL career as an undrafted receiver out of Oregon.

Last year, New Orleans decided to turn him into a tight end. This season, he leads the club in receiving touchdowns with five. His 31 catches for 349 yards ranks third in both categories.

"He's such a friendly target, just the way he moves and how smooth of a route runner he is, it makes it easy from the quarterback to read exactly what he's doing," quarterback Andy Dalton said of Johnson. "He's really stepped up and he's really found a good groove, and is playing with a ton of confidence right now."

The Niners returned home after being on the road for a week practicing in Colorado before playing in Mexico City to acclimate to the high altitude. The 49ers have practiced on the road between East Coast games in the past but struggled in their first game back home, including a 44-23 loss to Kansas City last month.

San Francisco is 1-4 under Shanahan in its first game back after practicing on the road. But this one could be even more challenging on a short week with Thanksgiving thrown into the mix, as many players have friends and family visit for the holiday.

"I have to remind some of these young guys that it's their (relatives') vacation," Shanahan said. "This is your job, so don't feel guilty when you don't hang out with your uncle late at night. You can hang out with him on Sunday night. He's just chilling, doesn't have stuff to do, but you don't come to his job and yell at him to come home early and hang out with you, so sometimes you have to explain that stuff to young guys."