Titans settle for too many field goals in loss to Bengals 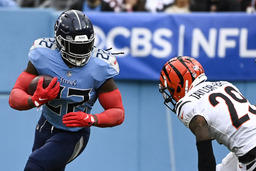 NASHVILLE, Tenn. (AP) The Tennessee Titans are not among the NFL's highest-scoring teams.

Thanks to two-time NFL rushing leader Derrick Henry, they have been one of the league's best scoring touchdowns inside the red zone.

The Titans snapped a two-game winning streak with a 20-16 loss to the defending AFC champion Bengals because they settled for too many field- goal attempts and couldn't score even a single touchdown inside the Cincinnati 20.

"Definitely it was frustrating," said Henry, who came in not only leading the league with 1,010 yards rushing but third with 10 rushing touchdowns. "Whenever you get down there you want to get points, and we just strung some plays together to get down there, just couldn't get in the end zone."

The Titans (7-4) had been coming off their best offensive performance this season, scoring a season-high 27 points in winning at Green Bay on Nov. 17. Then hours after that win, offensive coordinator Todd Downing was arrested for speeding and driving under the influence.

Downing called this game as the Titans wait to hear more from the NFL or the legal process.

Tennessee came in second in the NFL in scoring TDs on 74.07% of red zone opportunities, trailing only the Bengals (7-4).

The Titans went 0 of 3 against Cincinnati, a defense tied for 15th inside the red zone. Bengals coach Zac Taylor said their defense was "excellent" in holding the Titans to field goals.

"They had a new kicker in there, so you want to make it hard on him, put the pressure on him," Taylor said.

That would be undrafted rookie kicker Caleb Shudak in his NFL debut with veteran Randy Bullock missing a second straight game with an injured right calf. Shudak made field goals of 33, 24 and 38 yards, but he missed a 35-yarder wide right at the end of the first half.

In a showdown against Joe Burrow and one of the NFL's highest-scoring offenses, the Titans held the Bengals to their fewest points in a win this season.

The Titans' lone TD came with a bit of luck.

Ryan Tannehill threw for 291 yards and was sacked only once. Tannehill would've had a TD pass if not for Cam Taylor-Britt poking the ball away from Henry 6 yards from the end zone after a 69-yard catch-and-run. Luckily for the Titans, rookie Treylon Brooks recovered the ball for his first NFL touchdown.

"Just got to be cleaner in the red zone," Tannehill said. "That's something we pride ourselves on and put a lot of focus and importance on throughout the season. And today we didn't execute well enough."

Titans coach Mike Vrabel spread the blame around beyond just the red zone woes and said the numbers back up the argument they lost the physical battle in this game.

"The way we rushed the ball. The way that we stopped the run. I do not think that we tackled well. We weren't able to get in any rhythm in the running game," Vrabel said. "I felt like there were times where things were working and clicking and then we weren't able to continue to sustain that."