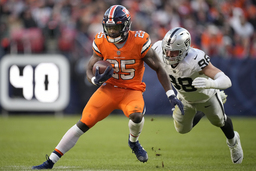 KANSAS CITY, Mo. (AP) The Kansas City Chiefs are signing two-time Pro Bowl running back Melvin Gordon to their practice squad, a person familiar with the decision told The Associated Press, adding some much-needed depth with a player that was recently released from the AFC West rival Denver Broncos.

The person spoke on condition of anonymity Monday because the signing was not yet official.

Gordon was cut by the Broncos last week amid fumble problems that plagued the 2015 first-round pick during his time in Denver. While he ran for 318 yards and caught 25 passes for 223 yards in 10 starts, averaging 3.5 yards per carry, Gordon also fumbled five times in 10 games, including a costly one in a loss to the Las Vegas Raiders.

The fumble issues are not new. Gordon has lost the ball 26 times in 108 games, or about once in every four games.

The Chiefs were the perfect landing spot for him for a couple of reasons.

First, they still have to play the Broncos twice in their final six games, when they are trying to maintain their grasp on the AFC's top seed and lone playoff bye.

Whatever information Gordon can provide on new coach Nathaniel Hackett's system, and the rest of the struggling Broncos, will only help them down the stretch.

Second, the Chiefs were in need of some depth at running back with Clyde Edwards-Helaire out with a high ankle sprain.

Seventh-round draft pick Isiah Pacheco had already surpassed Edwards-Helaire on the depth chart before the 2020 first-round pick landed on injured reserve. The Chiefs also have Jerick McKinnon, who is more threatening as a receiver than on the ground, and Ronald Jones II, who was active for the first time this season in Sunday's 26-10 win over the Rams.

Pacheco carried 22 times for 69 yards and a touchdown against the Rams. Jones had four carries for 12 yards.

"I think he ran hard. I think he had a lot of energy going," Chiefs coach Andy Reid said of Jones on Monday. "Everything was fast to him, but he was productive. He had some good, strong runs. He caught the ball well when he had the opportunity to do that, and had a big game there. I thought for the first time coming in he did well."

Now he'll be pushed for playing time by Gordon, who will start off on the practice squad while he learns enough of the offense to contribute on game day.

That's unlikely to happen in time to face the Bengals on Sunday in Cincinnati, but it could be in time for their next game against - you guessed it - the Broncos in primetime on Dec. 11 in Denver.