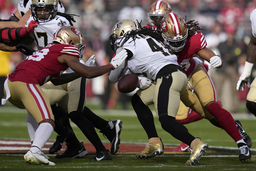 NEW ORLEANS (AP) As difficult as Dennis Allen's first year as the Saints' coach has been, New Orleans could climb right back into the NFC South race by winning its next game.

Just don't expect Allen to be touting that fact this week.

While technically accurate, it's not necessarily representative of the product the Saints (4-8) have put on the field.

"I don't think we can pay attention to the standings too much," Allen said Monday after reviewing video of yet another loss this season in which his team was plagued by botched execution at critical moments.

Two turnovers, untimely penalties and a missed field goal during a 13-0 loss at San Francisco on Sunday provided the latest examples of the mistake-prone play that has plagued the Saints much of this season.

"It's frustrating because (those mistakes) keep you from winning games and we as a coaching staff and us as players, we've got to at some point take the accountability and get it fixed if we want to start winning games," Allen said. "I think we have a team that's got the capability of winning some of these games as we go down this stretch."

Alvin Kamara fumbled near midfield on the Saints' opening possession, leading to a 49ers field goal. He lost a second fumble in the second half near the Niners' goal line. One Saints defensive penalty wiped out what could have been a momentum-changing interception. A pre-snap penalty on a fourth-and-5 play in Niners territory prompted the Saints to take their offense off the field in favor of a 48-yard field goal attempt, which Wil Lutz pulled wide left.

Asked if responsibility for such errors falls more on players or coaches, Allen responded, "You got to look at it as it's a combination of both.

The Saints' defense benefited from the return of several prominent players and put forth one of its best performances of the season by holding the Niners to one touchdown and fewer than 100 yards rushing. The Saints' defensive front also stopped San Francisco on a fourth-and-goal play in the first half.

"We did a nice job defensively against a really good offensive team," Allen said.

New Orleans continues to struggle with ball security as well as taking the ball away. Compounding the Saints' two lost fumbles was a penalty called on defensive back Chris Harris that wiped out rookie Alontae Taylor's interception return to the San Francisco 8. The Saints' NFL-worst turnover differential dropped to minus-14. No other team was worse than minus-8 through Sunday's games.

Undrafted rookie Rashid Shaheed continues to show promise when given chances on offense. While he was targeted just three times, he caught two passes for 53 yards and his 35-yard catch was New Orleans' longest against San Francisco's league-leading defense. He also gained 6 yards on his lone run.

While Kamara has been arguably the Saints' best offensive player for the past half decade, he could wind up having his worst season statistically this year.

He has lost four fumbles and has scored three touchdowns. He was held to 50 total yards from scrimmage by San Francisco - on the low side for player who often surpasses 100 scrimmage yards in a game.

P.J. Williams left Sunday's game with a knee injury. New Orleans is still awaiting the return of top cornerback Marshon Lattimore, who returned to practice on a limited basis last week but remained out for a seventh straight game with an abdominal injury.

If Lattimore is "able to get out there and practice and practice at a level that gives us a feeling that he can perform his job, then he'll be up," Allen said.

16 - The number of plays the Saints ran between the San Francisco 30- and 1-yard lines, including the missed field goal, before being shut out for the first time in 332 games - a streak dating to the end of the 2001 season.

The Saints travel to Tampa Bay for a Monday night game that could prove pivotal in the race for the anemic NFC South. A victory would pull the Saints within a half-game of the first-place Buccaneers (5-6) with four games to play.

"I do think we've got guys that are willing to fight in that locker room and I think our guys go out there and play hard," Allen said. "We just got to do a better job of executing."