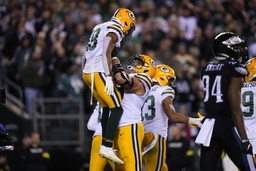 "What a crazy day," Bakhtiari tweeted Friday afternoon. "Thought I may have strained my abdomen or something this morning, so I brought it up to our team doctor. Next thing I know, I'm having surgery. Did not expect this. Everything went well. Thank y'all!"

The Packers (4-8) released an injury report Friday that ruled Bakhtiari out for Sunday's game.

This will be the fourth game that he's missed, having sat out Green Bay's first two games while recovering from a knee injury that required three surgeries and caused him to miss all but one game in the 2021 season. Bakhtiari's knee issue also caused him to miss an Oct. 23 loss at Washington.