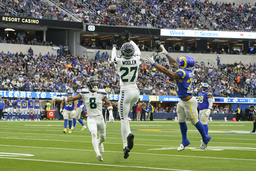 RENTON, Wash. (AP) One of the missing pieces from Geno Smith's terrific comeback season for the Seattle Seahawks was directing something memorable late in the game.

That finally happened Sunday when Smith led a game-winning drive in the final minutes as Seattle rallied past the Los Angeles Rams for a 27-23 victory in a must-win game for the Seahawks' playoff hopes.

Smith hitting DK Metcalf for the winning touchdown with 36 seconds left was another special moment to be savored in what has continued to be an unforgettable season for Seattle's QB. His 367 yards passing were a career high, he threw at least two TD passes for the sixth straight game. If not for a disputed interception, Smith's 116.1 passer rating would have been closer to 130.

"I think it puts it to rest that, OK, he's done that. He's come from behind and led the final drive. ... It's just good to have that behind him. It's been a while and he was aware of that," Seattle coach Pete Carroll said.

But the fact Smith had to rally the Seahawks (7-5) despite such a big game throwing the ball only highlighted some of Seattle's continued deficiencies.

Seattle's defense struggled to stop the run for a third straight game. And this wasn't the Rams' Super Bowl-winning offense they were failing to slow. This was a Rams unit filled with backups that were finding plenty of yards to gain against a defense that has continued to backslide following a strong midseason stretch.

Additionally, Seattle's run game remained mostly quiet, but that was as much to do with injuries as effectiveness. Kenneth Walker III had just three carries for 36 yards and played only 14 snaps before being sidelined by a foot/ankle injury. Deejay Dallas was also slowed by an ankle sprain and it left Tony Jones Jr. as an unexpected contributor in the second half.

The efficiency of Seattle's pass game and the connection between Smith and his primary wide receivers continues to thrive. The win over the Rams was a display of just how strong that connection has become. Smith was 17 of 20 for 255 yards and two touchdowns when targeting Lockett and Metcalf. All eight of Metcalf's targets resulted in completions. Whatever concerns about a dropoff in production for Metcalf and Tyler Lockett with the departure of Russell Wilson have been pushed aside. Both players are on pace for nearly 100 catches, which for Metcalf would be a career high. Lockett is on pace for 10 TDs, which would match his career best.

For the first time this season, the Seahawks won a game when allowing more than 150 yards rushing. Seattle still managed to let the Rams rush for 171 yards and average 5.2 yards per carry. More than half those yards came in the first half before Seattle made some adjustments, but it's still a troubling trend for the Seahawks. In the past three games, Seattle has allowed 615 yards rushing and 5.3 yards per attempt.

What more can be said about rookie CB Tariq Woolen? While it wasn't a flawless game, Woolen did pick off his sixth pass of the season, tying Seattle's record for interceptions by a rookie. He's tied for the league lead with Philadelphia C.J. Gardner-Johnson and remains one of the favorites for defensive rookie of the year. Woolen is also getting the treatment more established standout cornerbacks receive with teams actively choosing not to throw his direction.

The overall health of Seattle's running backs room, which is especially important for a team that wants balance offensively. Injuries to Walker and Dallas were exasperated by Travis Homer being inactive and left Jones getting an unexpected amount of snaps. Depending on the severity of the injuries, Seattle may need to make a roster addition to bolster its options.

The running back situation will be watched all week. Carroll was vague with updates about Walker and Dallas. Walker jammed his ankle and while it's not a traditional ankle sprain there is some strained tissue in the ankle area leaving his status undetermined. Dallas' injury is more of an ankle sprain. ... S Ryan Neal, already dealing with an elbow issue, has a sore knee, but Carroll said he's hopeful he'll be able to play Sunday.

12 - Smith has posted at least a 60% completion percentage and a passer rating of 80 or higher in all 12 games this season. It's tied for the longest streak to begin a season, along with Aaron Rodgers (2011) and Peyton Manning (2009).

Seattle begins a critical two-week stretch with consecutive home games five days apart. The Seahawks will host Carolina on Sunday with the Panthers coming off their bye. That's followed by a Thursday night showdown with San Francisco and massive implications in the NFC West race on Dec. 15.