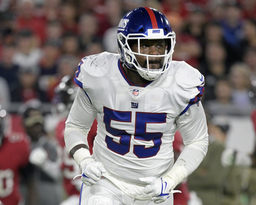 BEREA, Ohio (AP) The Browns found a linebacker to plug into the middle of their defense.

Cleveland signed veteran Reggie Ragland from Las Vegas' practice squad on Wednesday, a move necessitated by losing Sione Takitaki for the season with a knee injury sustained last weekend in a win over Houston.

Takitaki was placed on injured reserve. He is the third starting middle linebacker to suffer a season-ending injury, following Anthony Walker Jr. and Jacob Phillips.

The Browns also placed wide receiver Anthony Schwartz on injured reserve with a concussion. Schwartz, whose career has been slowed by injuries, also got hurt in the game at Houston.

To add depth, Cleveland claimed wide receiver Jaelon Darden off waivers from Tampa Bay. The 5-foot-8, 175-pound Darden has appeared in 21 games with eight receptions for 69 yards. He played in 12 games with the Buccaneers this season.

The 6-foot-2, 252-pound Ragland gives the Browns needed interior size and experience. A second-round pick out of Alabama by Buffalo in 2016, Ragland has made 47 starts and played in 75 NFL games. He made nine starts for the Giants last season.

Ragland wore No. 19 during the portion of practice open to reporters. Coach Kevin Stefanski said it's too early know if Ragland can help this weekend, when the Browns (5-7) visit the Cincinnati Bengals (8-4).

"He is spending a lot of extra time with (linebackers) coach (Jason) Tarver and (run game coordinator) coach (Ben) Bloom to get up to speed with what we are doing defensively," he said. "We will see how far along he comes this week."

Ragland has recorded 276 tackles, 3 1/2 sacks, recovered two fumbles and an interception. He also has played for Kansas City and Detroit.

Takitaki developed into a solid player this season after being pressed into action because of the injuries to Walker and Phillips. He was second on the team with 69 tackles.