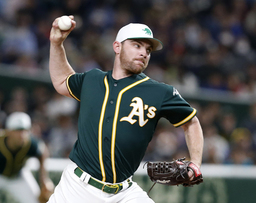 TOKYO (AP) Amid all the hoopla surrounding Ichiro Suzuki's return to Japan with the Seattle Mariners, it's been easy to overlook something else: the Oakland Athletics are here, too.

The A's are used to being seen as the also-rans, and even relish it. They were a playoff team last season - not the Mariners. And when "Ichiromania" subsides after the season-opening games in the Tokyo Dome on Wednesday and Thursday, the A's will again be under-the-radar favorites.

"The A's have always been an underdog organization no matter how you put it," A's pitcher Liam Hendriks said. "We enjoy proving people wrong."

Teammate Stephen Piscotty, who is playing for his childhood team, put it a different way.

"I don't think we care too much about how that's viewed," he said. "Last year's expectations weren't all that high, and we showed why that was wrong. We're out this year to take down the division and just play our brand of baseball."

He grew up in Perth, Australia, where he forsook Aussie Rules Football for baseball. He was cut twice from state baseball teams in Australia, but eventually the Minnesota Twins signed him in 2007.

"I told myself I'd give it a few years, and if I'm not as good as I think I am, I'll go back to Australia and pick up again with Aussie Rules."

He's been traveling, but he's still around after stints with the Twins - he called himself a "failed starting pitcher" there - to the Kansas City Royals, Toronto Blue Jays - and now starting his fourth season with the A's.

"I've been around," he said. "There were a lot of teams that didn't want me, but there were obviously teams that wanted me. Somebody saw something there."

Hendricks has become a multi-functional pitcher. He's was the opening pitcher in the A's 7-2 wild-card playoff loss to the New York Yankees, giving up a two-run homer in the first inning to Aaron Judge. That was his only inning.

He's basically a relief pitcher, but tries not to get hung up on terms; opener, starter, set-up man - you name it.

"My biggest goal as a starter or opener or whatever you want to call it is to go out there and get us a clean inning and get the next guy in," he said. "It helps to be versatile."

Hendriks started an exhibition game Sunday in a 5-1 victory over Japan's Ham Fighters at the Tokyo Dome. He'll be available in relief in the A's two games with the Mariners.

"I need to go out there and be ready for anything, and expect any role," he said.

That could include facing Ichiro in what could be his final at-bat - or not. The 45-year-old Ichiro has left everyone guessing about his plans after the two games in Japan.

"If you're going to be overshadowed, it might as well be by the all-time hits leader in baseball," Hendriks said. "We're just happy to be along for the ride. I can't wait for the opening series when they announce Ichiro and hear that crowd. I'm pretty excited for it."