Red Sox aim to avert sweep in finale vs. Rays 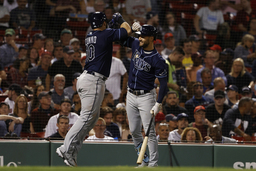 The Boston Red Sox look to avoid a costly sweep as they host the Tampa Bay Rays in the finale of a three-game series Wednesday night.

The Red Sox (79-62) have dropped three straight to see their grip on the second American League wild card drop to two games over the suddenly surging Toronto Blue Jays, who have won six in a row. The New York Yankees, also in the midst of a slump, maintain a half-game lead over Boston for the first wild card.

Magnifying the Red Sox's skid is that they've allowed at least 11 runs in each defeat. Eduardo Rodriguez was roughed up for six runs over 3 2/3 innings Tuesday in a 12-7 setback.

"He wasn't able to put them away," Boston manager Alex Cora said of the left-hander, who had held the Rays scoreless over six innings in his last outing. "... Two-strike hits, two-strike damage. It happened fast."

The Rays (88-51) have won four of five as they continue to run away with the top overall seed in the AL. Tampa Bay upped its advantage in the East to 9 1/2 games following Tuesday's results.

Nelson Cruz (4-for-5) and Mike Zunino (3-for-4) led the way on Tuesday with two home runs and four RBIs apiece. Cruz reached 30 homers for the seventh time in eight seasons, becoming the oldest player in major league history to accomplish the feat at 41 years old.

"It's an honor to be by his side," Cruz said of fellow Dominican Ortiz.

On the other end of the age spectrum, Rays rookie Wander Franco worked a seventh-inning walk to extend his on-base streak to 37 games -- an AL record for a player 20 years old or younger. Hall of Famer Mickey Mantle had held the mark since 1952.

Frank Robinson holds the overall record at 43 games in 1956.

Eovaldi pitched 6 1/3 quality innings his last time out, holding the Cleveland Indians to three runs on six hits. He punched out nine and extended his streak to five games allowing three runs or fewer.

The rookie McClanahan took the loss against Boston in his last performance, surrendering four runs on eight hits over five innings on Thursday. He is 1-1 with a 4.09 ERA in two starts against the club.

Wednesday marks the finale of the regular-season series between the Red Sox and Rays. Tampa Bay has won 11 of 18, including nine of 12 since the All-Star break.