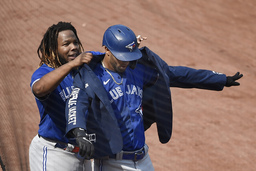 After scoring 44 runs in their past three games, the Toronto Blue Jays hope their bats stay hot when they open a three-game series against the visiting Tampa Bay Rays on Monday night.

The Blue Jays (80-63) defeated the Baltimore Orioles 22-7 Sunday to complete a 7-1 trip and enhance their chances for an American League wild-card spot. They have won 11 of their past 12 games.

They opened the game Sunday with a five-run first and led 16-4 after three innings.

Toronto scored 47 runs, a club record for a four-game series, in winning three of four games at Baltimore.

Lourdes Gurriel Jr. and Teoscar Hernandez hit grand slams, the first time Toronto has had two in a game in franchise history. Gurriel, who has club-record four grand slams this season, had two homers and a career-best seven RBIs Sunday.

"I think we're putting pressure on everyone else," said left-hander Steven Matz, the winning pitcher on Sunday. "That's what we want -- the pressure to be on them. They know within one inning we can score 10 runs, and that's a pretty special thing."

The Rays (89-54) are trying to clinch the AL East, which they lead by nine games. They lost 8-7 in 11 innings to the host Detroit Tigers on Sunday in the rubber match of a three-game series and are 5-5 in their past 10 games.

Right-hander Alek Manoah (5-2, 3.71) is scheduled to start for the Blue Jays. The rookie is 1-1 with only two earned runs given up in two starts against the Rays.

The bullpen has been strong for the Rays, but on Sunday the relievers could not hold a three-run lead in the eighth and a two-run lead in the 10th. J.P. Feyereisen walked in the winning run with two out in the 11th.

"We're a really good team," Rays manager Kevin Cash said. "(When) we have the lead, we feel like we should win the ballgame."

The Rays will be without shortstop Wander Franco (hamstring) for two to three weeks. Taylor Walls was promoted from Triple-A Durham to fill in, his third major-league stint this season.

He was 2-for-6 with a walk over the last two games of the Detroit series and is hitting .209 with one home run and 13 RBIs in 46 major-league games this season

"(I am) more than ready," Walls said. "I feel like I belong here. I'm just really trying to step in, help this team as much as possible and try to clinch."