Clayton Kershaw set to return for Dodgers against Diamondbacks 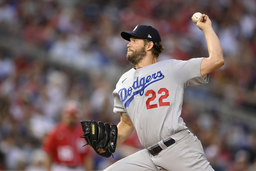 Los Angeles Dodgers left-hander Clayton Kershaw is set to return after missing more than two months with inflammation in his throwing elbow.

The three-time National League Cy Young Award winner will take the mound on Monday night in the opener of a three-game series against the visiting Arizona Diamondbacks.

Kershaw (9-7, 3.39 ERA) made his last start on July 3 at the Washington Nationals, departing after four innings because of a rain delay.

The following week, he underwent an MRI to detect the cause of soreness in his elbow and was diagnosed with inflammation, considered a positive result at the time.

He continued to experience soreness during his rehabilitation, however, and didn't get comfortable enough to make a rehab start until tossing three innings for Triple-A Oklahoma City on Tuesday.

"There's a potential for four or five starts before the end of the season," Roberts said. "There's ample time to get him right."

He made his only start this season against Arizona on May 19 at Dodger Stadium, allowing two runs and two hits in six innings. He did not receive a decision in the 4-2 victory.

The Dodgers (91-53) won't have the services of closer Kenley Jansen.

His daughter, Key'Gia Keziah Jansen, was born on Sunday morning and he'll be on the paternity list until Tuesday, Roberts said.

Los Angeles has also been without All-Star outfielder Chris Taylor, who missed the past two games with neck soreness and will likely sit out a couple more.

Their absences weren't a factor over the weekend, as the Dodgers swept the San Diego Padres to stay 2 1/2 games back of the San Francisco Giants for the NL West lead.

Max Scherzer has been the best pitcher for Los Angeles since he was acquired from the Nationals on July 30 and should make an intimidating duo with Kershaw.

Scherzer, who also has three Cy Young Awards on his resume, brought a perfect game into the eighth inning on Sunday. He gave up a one-out double and departed after eight shutout innings in the 8-0 win.

The Diamondbacks (47-96) should arrive with confidence after winning their past two games at the Seattle Mariners for their first road series win since April.

Zac Gallen is expected to start on the mound for the Diamondbacks.

Gallen (2-9, 4.32 ERA) pitched well against the Dodgers on July 30, holding them to two runs and five hits in six innings. Arizona eventually won 6-5 in 10 innings.

Gallen is 0-1 in five career starts against the Dodgers with a 2.45 ERA.

Seth Beer made his major-league debut against the Mariners and the former first round pick of the Houston Astros went 4-for-8 with a home run and four runs scored as a designated hitter and pinch-hitter in the three games.

"I remember taking the first pitch, my first at bat, and going, 'Man, you know, it's still the same ball," Beer said. "So I think it's the same game, just a bigger stage."