Yankees in must-win mode against Rangers 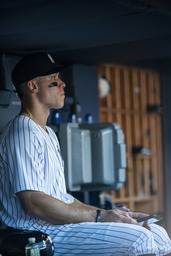 The look of frustration on Gerrit Cole's face said it all for the New York Yankees.

Streaky all season, the Yankees endured a lost weekend against the Cleveland Indians and with the games dwindling, they can't afford many more poor performances, starting Monday night when they host the Texas Rangers in the opener of a three-game series at Yankee Stadium.

Cole was tagged for seven runs and 10 hits in 5 2/3 innings Sunday.

In this stretch, the Yankees own nine losses to teams with losing records and Sunday marked the third time since 2016 they allowed double-digit runs in consecutive games.

"We got to do better than this," manager Aaron Boone said. "That's an awful couple of days out there, and we got to get past it in a hurry and we got to play well. We got to go and play a complete game like we did Friday night, but we can't do that every two, every three games. We got to play really good baseball if we're even going to think about being where we want to be."

New York played Sunday without Joey Gallo and he is day-to-day for his first meeting with his former team due to neck tightness.

Texas (55-94) is 2-5 in its past seven games and each loss has been by at least five runs. On Sunday, the Rangers took a 7-2 loss to the visiting Chicago White Sox, when they allowed five runs in the fifth inning.

"We've got a little ways to go to kind of compete with that. So it was just kind of was a reminder of where we're at, I guess," Texas manager Chris Woodward said. "The effort was there, just the ability to execute, we got outclassed a little bit."

He took a no-decision Wednesday in Baltimore, when he allowed a run on three hits and got a career-high 11 strikeouts in 6 1/3 innings.

AJ Alexy (2-0, 3.68 ERA) will make his third career start and fourth career appearance since joining the Rangers on Aug. 30. Alexy pitched 11 scoreless innings in his first two starts but in a 15-1 loss to Houston on Sept. 13, he was tagged for six runs and four hits in 3 2/3 innings during a relief appearance.