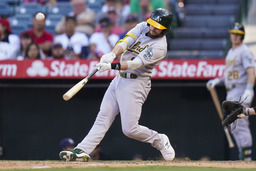 The Oakland Athletics hold destiny in their own hands when they open the final two weeks of the regular season with a four-game home series against the Seattle Mariners, beginning Monday night.

The A's (82-67) and Mariners (80-69) both secured key victories Sunday, and now go head-to-head separated by two games in the American League West and AL wild-card races.

In the West, the second-place A's trail the Houston Astros (88-61) by six games, with the third-place Mariners eight back.

Both are closer in the AL wild-card chase, with the A's two games behind the Toronto Blue Jays (84-65) and the Mariners four back.

Each of the A's 13 remaining games is against either the Mariners or the Astros. After a seven-game homestand this week in which it will host the Astros on Friday, Saturday and Sunday, Oakland will finish the regular season with six straight on the road -- three at Seattle and three at Houston.

Having watched his team win four games by two or fewer runs in the past five days, including a 3-2, 10-inning road affair over the Los Angeles Angels on Sunday, A's manager Bob Melvin believes his team has recaptured part of the magic that has landed Oakland in the postseason in each of the past three seasons.

"We've had our troubles with one-run games for a stretch, but that's kinda been our strength for a while now," he noted. "These guys know how to play close games. Here recently we've started to play like we normally do. It doesn't surprise me."

The Mariners have prevailed in seven of their first 11 head-to-heads with the A's, including a 5-3, 5-1 two-game sweep at Oakland in August.

While the A's are playing the Astros at the end of the next two weeks, the Mariners will have a scheduling advantage in that they will be facing the fourth-place Angels in a pair of series, including a three-game, regular-season-ender at home at the end of next week.

Coming off an 8-1 loss at Kansas City on Saturday night that doubled their deficit behind the A's, the Mariners rebounded behind a big day from Jarred Kelenic to thump the Royals 7-1 on Sunday in what manager Scott Servais labeled a must-win game.

"We needed to win this series. We won this series," Servais said of taking two of three in Kansas City. "We'll head to Oakland and see what happens there."

The Mariners are scheduled to open the series with left-hander Tyler Anderson (6-9, 4.14 ERA) on the mound. He is 5-4 since he was acquired from Pittsburgh in July.

Anderson has pitched three times without a decision in September, allowing eight runs in 15 innings. Seattle has won two of the three games.

The 31-year-old has faced the A's just once in his career, that coming last season while with the San Francisco Giants. He went 5 2/3 innings in a 14-2 win at Oakland, earning the win while allowing no earned runs.

Manaea has dominated the Mariners this season, allowing one run on just seven hits in 16 innings in a pair of wins. He has struck out 21 in those games.