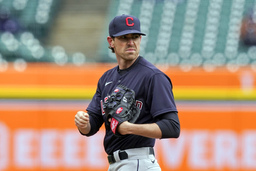 Shane Bieber makes his return from a three-plus-month absence on Friday when the Cleveland Indians continue their five-game series against the visiting Chicago White Sox.

Bieber (7-4, 3.28 ERA), the reigning American League Cy Young Award recipient, last appeared in a major league game on June 13. He left the mound that day with a strained muscle in the rotator cuff of his pitching shoulder.

"We'll definitely have a pitch count on him," Hale said. "We haven't established that yet, but it won't be too big of a jump from the rehab game there in the minor leagues to the big leagues. I wouldn't expect it to be a 20- to 25-pitch jump. Twelve to 15 at the most. We're gonna see how the game unfolds anyway through the first three or four innings."

Bieber owns a 3-0 record with a 2.05 ERA in three starts this season against the White Sox. Overall, he is 5-2 with a 2.66 ERA in 11 career encounters with Chicago, limiting the opposition to a .217 batting average.

The White Sox (86-67) were on Cloud Nine after clinching their first American League Central title since 2008 with a 7-2 victory in the opener of a doubleheader against the Indians on Thursday.

"The whole thing for me is Fantasy Island," Chicago manager Tony La Russa said. "Coming back like this. We all know the truth. The first three jobs, the clubs were struggling when I took over. Managers don't walk into a situation like this, with a team so ready to win, so I'm very, very fortunate."

Tim Anderson recorded his sixth career multi-homer performance, going deep to lead off the game and adding a three-run blast as part of a six-run second inning. Anderson is batting .361 (35-for-97) with six homers and 17 RBIs over his past 21 games.

Luis Robert launched a solo homer in the second to extend his career-high hitting streak to 12 games before adding an RBI single later in the same inning. Robert is batting a blistering .440 (22-for-50) with eight extra-base hits (six doubles, two homers) and 14 RBIs during his streak.

The Indians (75-77) salvaged a split with a 5-3 win in the nightcap, courtesy of Oscar Mercado's walk-off, two-run homer in the seventh.

Right-hander Dylan Cease (12-7, 4.09 ERA) will look to keep Cleveland in check on Friday in much the same manner as he did the Rangers on Sept. 17. Cease scattered four hits and struck out 10 in five innings of an 8-0 victory against Texas.

Cease, 25, was not as successful in his lone meeting with the Indians this season. He was blitzed for six runs on eight hits in 3 1/3 innings of a 6-5 setback on June 1. He is 1-2 with a 7.27 ERA in four career encounters with Cleveland.