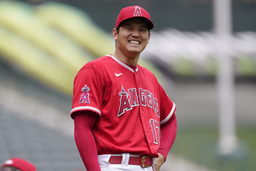 Shohei Ohtani survived the trade deadline. Next up, the Los Angeles Angels' star will take the mound Wednesday against the visiting Oakland A's in Anaheim, Calif.

The 2021 American League MVP is eligible to become a free agent after the 2023 season and has expressed his desire to play for a winning team.

The Angels have not had a winning record since Ohtani joined the club in 2018.

"The question isn't whether I want to stay," Ohtani said through an interpreter. "I have to do what I'm supposed to do. Regardless of where I am, what I do doesn't change. Of course, there's the part of me that feels grateful of how the team has taken care of me. I like the fans, too, of course. Right now, as long as I'm with the Angels, I want to do my best to win each and every game. There's tomorrow to think about, too, and I have to turn the page."

The Angels will have a lot to consider going into the offseason with an eye toward making immediate improvements in an effort to stay in good graces with a one-of-a-kind player like Ohtani.

Ohtani is 2-2 with a 3.55 ERA in six career starts against Oakland but has not faced them yet this season. He has had double-digit strikeouts in six consecutive starts, compiling 68 strikeouts in 39 innings.

Although they have lost their last three games, the A's are 7-5 since the All-Star break, the most notable difference being an improvement on the offensive side.

Overall, Oakland is 22-10 when scoring at least five runs.

"I just think their confidence is growing," A's manager Mark Kotsay said. "We struggled offensively for a large portion of the first half. Right now, I feel like that room in there is building some confidence and starting to believe in the process.

"Results help that -- getting hits and building innings. The momentum of the offense is there right now."

Oakland is expected to activate infielder Jed Lowrie any day. He missed the entire month of July with a sprained left shoulder, but he went 6-for-19 with two homers in five rehab starts for Triple-A Las Vegas.