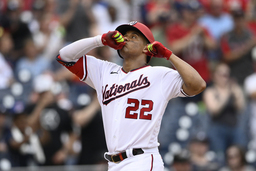 Tuesday was a big day for the San Diego Padres.

They swept a day/night doubleheader from the Colorado Rockies in San Diego.

That came after acquiring Juan Soto and Josh Bell from the Washington Nationals in the biggest blockbuster of the 2022 trade deadline, which also netted them infielder/outfielder Brandon Drury from the Cincinnati Reds.

"Ecstatic," was the word Padres manager Bob Melvin used to describe a whirlwind two days that also saw the Padres acquire closer Josh Hader from the Milwaukee Brewers. Hader made his Padres debut in Game 2 of the twin bill Tuesday night, recording his first win with the club.

On the field, the Padres have won the first three games of a rare five-game series against the Rockies.

"I think Bob was having fun," Preller said.

The fun becomes reality Wednesday night when Melvin plugs Soto and Bell into the Padres' batting order. He might also write the name of Drury in the lineup against Rockies right-handed starter Chad Kuhl (6-6, 4.59 ERA) for the fourth game of the marathon series.

The Padres did pay a steep price to acquire Soto, Bell and Drury.

Overall, the Padres traded away six of their current top-30 prospects -- and five players who were among their top-10 prospects earlier in the season.

"A day like this is made possible by our scouting department," said Preller.

The did wasn't all excitement. The Padres said goodbye to Hosmer and Voit, two very popular members of this team.

"It can be a tough day, especially when you lose a guy like Hosmer," said Melvin. "But we added two big bats in the middle of the order. Credit A.J. for getting all of this done. It's amazing how he has the pulse on everything out there. The lineup is going to look different than it has at any point this season. It's a deep lineup with some versatility."

And Fernando Tatis Jr. is getting closer to playing.

"I've never been part of this hectic a trade deadline with this many guys coming in," said Melvin.

The first Padres pitcher to benefit from the new lineup will be left-hander Blake Snell (3-5, 4.43 ERA), who will be paired against Kuhl on Wednesday. Snell is 3-0 over his last five starts, giving up fewer than two runs in four of the five games with a 2.81 ERA. He has 40 strikeouts in 25 2/3 innings.

Kuhl, meanwhile, has developed into the Rockies' top starter this season.

"I don't want to say Chad has been a pleasant surprise, because I think the talent is in there," Rockies manager Bud Black said last month. "He's been solid and there is more in there."