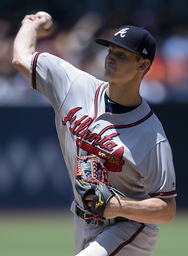 The last time Mike Soroka faced the Washington Nationals, his outing ended early and painfully. The Atlanta rookie right-hander will hope for better results Saturday when he starts for the Braves against the Nationals in the third contest of a four-game series.

The teams traded wins the past two days in Atlanta, with the Nationals rolling to a 13-4 victory Thursday before the Braves pulled out a 4-3 decision Friday.

Soroka (10-1, 2.24 ERA) started June 23 at Washington but was removed after pitching two scoreless innings. He was hit by a pitch on his pitching forearm in the top of the third and stayed in to run, but Josh Tomlin took over on the mound in the last of the third.

Soroka, who grew up in Canada, said after the game, "I've been hit with enough (hockey) pucks and baseballs in my lifetime to know what's going to be the aftermath of getting hit. ... Good news is, the inflammation's going to get out of there and hopefully I'll be in line for my next start."

The 21-year-old didn't miss a turn in the rotation. In fact, he is 2-0 with a 3.00 ERA in three starts since getting plunked. Overall, he has given up more than two runs in just four of 16 starts this year.

He did not figure in the decision in his latest start when the Nationals lost 4-3 on Sunday after the Philadelphia Phillies' Maikel Franco hit a walk-off homer in the ninth inning.

"I think today, my command early in the first inning was really good, and later on I (fought) with the command," Sanchez said postgame. "But at the end, I just used the right pitch to get out of (a key) jam."

The outing wasn't one of Sanchez's best in recent weeks, as he is 5-0 with a 2.40 ERA in his past nine starts. He has tossed exactly six innings in seven of his past eight starts, and he went 5 1/3 innings in the other outing during that span.

In Soroka's latest start, on Sunday in San Diego, he allowed no runs on six hits in seven innings to beat the Padres. He threw just 83 pitches and had nine strikeouts and one walk.

The Braves called up Kyle Wright to start Friday against the Nationals, and that gave Friday starter Julio Teheran and Soroka an extra day of rest for their turns.

Teheran was in line for the win Friday before Washington's Victor Robles tied the game in the top of the ninth with a two-run homer off Atlanta closer Luke Jackson.

However, the Braves got a walk-off single from Josh Donaldson with the bases loaded in the bottom of the ninth off Fernando Rodney.