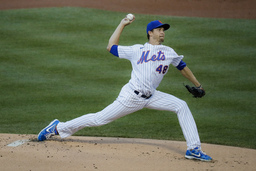 A pair of aces looking for their first victory will meet on Monday when the visiting New York Mets play the Atlanta Braves in the finale of a four-game series.

The Braves have won the first three games of the series between the National League East rivals and enter with a five-game winning streak. The Mets have lost five straight.

deGrom worked five scoreless innings against the Braves in the season opener. He allowed only one hit and one walk, while striking out eight. In his last outing on July 29 against the Boston Red Sox, deGrom extended his career-best scoreless streak to 31 innings before allowing a run. He threw six innings and allowed two runs on three hits, one walk and four strikeouts.

"He's a great pitcher and probably should have a better record than he does," teammate Justin Wilson said. "Clearly, Jake keeps us in the game all the time. That's why he's a two-time Cy Young winner. We've got to put some more runs for him. We've also got to shut him down as the bullpen goes."

Notable in his last start was the 101.1 mph fastball recorded by deGrom, the fastest pitch of his career. His velocity through the first two starts has averaged 98.6 mph, second-best in the majors among those with at least 100 pitches thrown.

Soroka will also be making his third start of the season. He pitched six scoreless frames against the Mets in the opener and allowed three runs, two earned, in 5 1/3 innings against Tampa Bay. Soroka retired just one batter in the sixth inning and seemed to lose his rhythm after he stumbled and fell after throwing a pitch with two outs in the fifth.

"He just continues to get better," Atlanta outfielder Ender Inciarte said. "He looks like a veteran in the clubhouse. He's confident and he's a mature guy. It's fun to watch him pitch out there."

A bigger question may be the status of Cespedes, who did not show up for Sunday's game. The Mets released a statement that said, "As of game time, Yoenis Cespedes has not reported to the ballpark today. He did not reach out to management with any explanation for his absence. Our attempts to contact him have been unsuccessful."

Cespedes, who missed the entire 2019 season with injuries, has struggled at the plate and is hitting .161 with two homers and four RBIs. He has 15 strikeouts in 34 plate-appearances and has fanned at least twice in six of his last seven games.

The Mets are also concerned about the poor start of first baseman Pete Alonso, who was 0-for-4 with three strikeouts and is 2-for-17 on the road. Michael Conforto walked twice and has reached base safely in every game.

Atlanta's Dansby Swanson picked up a single on Sunday and has hit safely in all 10 games.