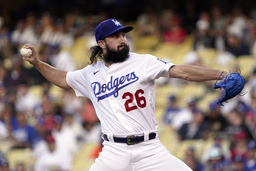 Tony Gonsolin will try to become the first pitcher in the major leagues to reach 10 wins on Sunday night when the visiting Los Angeles Dodgers face the Atlanta Braves in the rubber contest of a three-game series.

The teams have split the first two games. The Dodgers posted a 4-1 victory on Friday before seeing their four-game winning streak come to an end with a 5-3 setback the following day.

Atlanta manager Brian Snitker said the playoff atmosphere around the series has elevated the play of both teams.

"I mean these are fun games to be a part of. They're gut-wrenching, but they're fun," he said. "There's a lot of emotion out there and energy and it seemed like everybody (in the crowd) stayed throughout the whole game."

Gonsolin is coming off a win over Cincinnati on Tuesday in which he allowed two runs on three hits in five innings. The right-hander is 4-0 in four June starts with a 1.16 ERA in 23 1/3 innings.

Gonsolin is 1-0 with an 0.90 ERA in two career starts against Atlanta. He beat the Braves on April 20 by allowing one hit over six shutout innings.

He will be opposed by the hard-throwing mustachioed Strider, who is coming off his worst start since joining the rotation. Strider gave up a season-high six runs on six hits in 3 2/3 innings in a no-decision against San Francisco. He had fanned 11 in his previous start against Washington.

"There are days when you don't feel good and you've got to work on getting outs and getting ahead of guys and still try to pitch," Strider said. "I didn't have great command and feel, so there's no reason to muscle up and try to throw hard. It's a matter of getting ahead and executing with two strikes."

Strider has yet to face the Dodgers in his career.

Both shortstops are swinging hot bats going into the finale.

Los Angeles' Trae Turner went 2-for-4 on Saturday and has 12 hits over his last five games to raise his average to .320.

Atlanta's Dansby Swanson went 2-for-4 with a home run on Saturday to raise his average to .307. He has gone deep four times over the last four games.

Atlanta right fielder Ronald Acuna Jr. left the game in the ninth inning for precautionary reasons. Acuna fouled a pitch off his foot earlier and Snitker didn't want to take any chances. Snitker said afterward that Acuna will receive treatment before determining whether he will play.

"It was just really, really sore," Snitker said. "We didn't want him coming out of the box hurting anything else, so we'll see where he's at."