Dodgers' Andrew Heaney aims to hold up his end vs. Royals 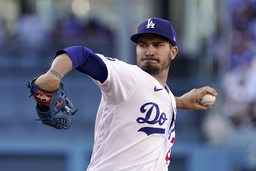 Andrew Heaney appears to be in an enviable position.

He's sandwiched in the Los Angeles Dodgers' rotation between two pitchers who headed into their respective starts this weekend against the Kansas City Royals with 13-1 records.

Or is Heaney, a left-hander, under more pressure to live up to the neighborhood?

The Dodgers and host Royals will play the second contest of a three-game series on Saturday, with Heaney (1-0, 0.64 ERA) scheduled to face Kansas City right-hander Brad Keller (6-12, 4.45).

The Dodgers won 8-3 in the series opener on Friday behind an outstanding effort from Tony Gonsolin.

Gonsolin, who became the second National League pitcher this season to record 14 wins, didn't allow a baserunner until issuing a walk in the sixth inning. He surrendered his first hit with one out in the seventh.

After matching the Royals with zeros through six innings, the Dodgers scored five runs in the seventh and three in the eighth.

So will Heaney feel pressure to match Gonsolin and Tyler Anderson, who will carry his 13-1 mark into Sunday's series finale?

Heaney, 31, has battled injuries all season.

He started the season well, picking up his win in his second start after scattering one hit and striking out 11 over six scoreless innings in a 9-1 victory over Cincinnati on April 17. Shoulder issues, however, shut him down until mid-June.

Heaney returned for one start but was back on the shelf for over one month before returning to the rotation. He has allowed four runs (one earned) on nine hits in 12 2/3 innings over his last three outings.

Keller, like most of his fellow Kansas City starters, has never faced the Dodgers. He's trying to find a consistent groove, something that won't come easily against the team with the best record in the majors and an 11-game winning streak.

After concluding a three-start skid by surrendering eight runs on 13 hits in a 9-2 setback at the Chicago White Sox, Keller turned in a solid outing on Sunday. He limited Boston to one run on four hits in six innings of a 13-5 victory.

He's not going to change his approach just because he's facing the Dodgers.

"I think I need to stick with our game plan, stick with what we've been doing," Keller said. "I don't think you change what you do just because it's a team we've never faced, a really good team at that. I think you go into every start with the same mentality. You game-plan, you trust your stuff, and you go out and compete.

"They're a good team. That's why they've won a lot of games. I think we've got a pretty good team and we're on a roll right now. We're going to go out there and compete."

"I don't know if it's an advantage either way," he said. "We see each other in spring training, but not very often. It's going to be interesting to see. We'll just pitch to our strengths, read their swings and approaches, and make the adjustments we need to make."