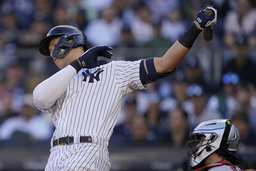 After Judge went hitless in eight at-bats and the teams split two games at Yankee Stadium, the series will shift to Cleveland for Game 3 on Saturday night when the Guardians look to keep the slugger silent again, while the Yankees hope to come through more consistently in key situations.

New York opened the series with a 4-1 win Tuesday night behind Gerrit Cole's 6 1/3 innings of one-run ball along with homers by Harrison Bader and Anthony Rizzo. Following a scheduled day off and a rainout, Cleveland got the split when Oscar Gonzalez hit a tiebreaking single off Jameson Taillon to score Jose Ramirez in the 10th inning in Friday afternoon's 4-2 win.

Josh Naylor, who scored on Andres Gimenez's RBI single in the fourth to cut the deficit to 2-1, added an RBI double in the 10th for an insurance run. Amed Rosario hit Cleveland's fourth homer of the postseason to knot the score at 2 in the fifth.

Judge struck out four times Friday and grounded out in his fifth at-bat in the ninth inning. He is 0-for-8 in the series with seven strikeouts and has reached base once.

"Hitters can't hit a button, and good as guys are, sometimes guys take 0-fors," Cleveland manager Terry Francona said. "Until you get through a series successfully, I don't think anybody is going to stand up here and pound our chest. He's too dangerous. We know that."

Judge has historically struggled against Cleveland in the postseason. He was 1-for-20 and had three games of four strikeouts apiece in the 2017 ALDS when the Yankees rallied to win in five. In the wild-card round two years ago in Cleveland, Judge was 1-for-9 when the Yankees swept the best-of-three series.

"I've had two bad games in my career multiple times," Judge said. "So it's part of it and you got to learn from it, learn from the mistakes and get ready for the next one. There's no breaks right now."

While Judge's torrid pace has slowed down after hitting his 62nd homer to break Roger Maris' AL record, the rest of New York's offense was feeble in key spots Friday. Giancarlo Stanton hit a two-run homer in the first inning off Shane Bieber, but New York struck out 15 times, went 0-for-7 with runners in scoring position and stranded 11.

The winner of Saturday's game will be one win away from a trip to the ALCS, with Game 4 set for Sunday. Cleveland is seeking its first home postseason win over the Yankees since the ALDS in 2017, when it won the first two games.

New York is looking to avoid falling into a 2-1 deficit in the ALDS for the second straight time. The Yankees lost Game 3 against Tampa Bay two years ago and lost the series in five. Their only ALDS victories when losing two of the first three games were in 2001 against Oakland and 2017 against Cleveland.

McKenzie is 1-0 with a 2.45 ERA in two career regular-season starts against the Yankees. McKenzie also faced them as a reliever in Game 2 of the 2020 wild-card series and allowed two runs in 1 2/3 innings.

New York's Luis Severino (2022 postseason debut; 7-3, 3.18 regular season) will make his 10th career postseason appearance and his first start since Game 3 of the 2019 ALCS at home against Houston, when he allowed two runs in 4 1/3 innings.

Severino is 1-1 with a 5.79 ERA in three career ALDS starts. He earned the win against Cleveland in Game 4 of the 2017 ALDS, when he allowed three runs in seven innings of a 7-3 win.