After another postponement, Yankees, Guardians ready for ALDS Game 5 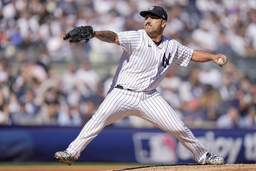 NEW YORK -- For the Cleveland Guardians and New York Yankees, the forecast is the good news, while the bad news is that one of the teams will play their final game of the season.

The Yankees and Guardians finally conclude the American League Division Series Tuesday afternoon when they play a winner-take-all Game 5 to decide who faces the Houston Astros in the AL Championship Series.

The teams are meeting in a fifth game for the third time and the winner heads to Houston for Game 1 of the ALCS on Wednesday. Cleveland won Game 5 in 1997, and the Yankees won Game 5 in 2017.

Unusual scheduling and two rainouts extended the series into an eighth day after a rain delay of over two hours ultimately led to Monday's contest being postponed. When the series reconvenes, sunny skies are projected with temperatures in the high-50s.

The series began last Tuesday when the Yankees recorded a 4-1 victory. Instead of playing Game 2 Wednesday, the teams worked out in sunny conditions and then Thursday's game was rained out roughly six hours before the scheduled first pitch, creating a scenario of four games in four days.

Cleveland won Games 2 and 3 to push the Yankees to the verge of elimination. The Yankees sent the series back to New York with a 4-2 win on Sunday when Gerrit Cole allowed two runs in seven innings and Harrison Bader hit a two-run homer.

Rain was forecasted for Monday night, but the teams believed they could get the game in. Then a new band of poor weather emerged, resulting in the postponement.

"The forecast was that any point from 7:30, 8, 8:30, 9 at the latest, worst-case scenario, we could get this thing in. It'd be dry after," New York general manager Brian Cashman said. "It slowed down on us. So, obviously it adjusted the goalpost to some degree closer to the worst-case scenario, but at no point was it ever that we expected not to play."

Jameson Taillon was originally slated to start Monday after taking the loss in Game 2. Instead, the Yankees announced Nestor Cortes would start on three days' rest.

Cortes is starting on three days' rest for the second time in his career. The previous instance was Sept. 10, 2019, in Detroit, when he allowed four runs (two earned) on six hits in 2 1/3 innings.

"I'm ready to go. I'm going to empty the tank," Cortes said Sunday. "If I have to come back on short rest, whether it's two or three days, I'm going to try and prepare in between the best I can to feel as best as I can."

Cortes is 1-0 with an ERA of 2.50 in five regular-season appearances (two starts) versus the Guardians.

Cleveland did not officially announce a starter, but Aaron Civale could get the start.

"We like Civale," Cleveland manager Terry Francona said Monday afternoon. "The longer he stays out there, the better off we are."

Civale was 0-2 with a 10.00 ERA in two regular-season starts against the Yankees this year. He was tagged for six runs in three innings on April 24 in New York and allowed four runs in six innings on July 2 in Cleveland.