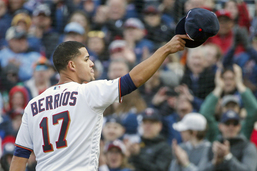 MINNEAPOLIS (AP) When the time came for Rocco Baldelli to remove Jose Berrios from the game, the new manager of the Minnesota Twins clapped as he reached the mound and extended his right hand for a rare congratulatory shake with his ace-in-the-making.

This opening day victory over Corey Kluber and the Cleveland Indians was clearly an occasion to celebrate.

Marwin Gonzalez hit a two-run double in the seventh inning , Berrios outdueled Kluber and the Twins gave Baldelli a win in his debut by beating the Indians 2-0 on Thursday to start the season.

"Usually you get a fist bump or a `good job,' and then you walk off of the mound, but this was opening day," Berrios said through the team's interpreter. "It's a special day for all of us and the first game for him as a manager. It was emotional out there."

Berrios set a Twins opening day record with 10 strikeouts, with the 24-year-old right-hander picking up where he left off as an All-Star in 2018. The youngest opening day starter for the Twins since Brad Radke in 1996, Berrios allowed just two hits and one walk in 7 2/3 innings with his curveball in prime form. Then Taylor Rogers recorded the last four outs for the save, stretching his scoreless streak to 27 straight innings.

"Jose's effort out there today kind of speaks for itself. It deserved probably more than a handshake," Baldelli said. "Probably could have given him a little hug out there, and that probably wouldn't have done the thing justice, either."

Kluber hardly deserved defeat, after retiring the first 14 batters he faced until Gonzalez drew a walk. Byron Buxton broke up the no-hit bid with a one-out double in the sixth. Then the Twins took the lead in the seventh solely with hits by new players, singles by Nelson Cruz and C.J. Cron and then the game-breaker by Gonzalez. Jonathan Schoop, the fourth member of the lineup making his Minnesota debut, even got hit by a pitch that inning.

Gonzalez, the multi-position player who spent seven years with Houston and signed with Minnesota more than a week into spring training, hit a 0-1 changeup from Kluber that landed in left-center.

"I threw a lot of good changeups throughout the day today, and that was really the first one that kind of floated on me," Kluber said, "and unfortunately, it was in a bad spot."

The two-time AL Cy Young Award winner making his fifth straight opening day start, the first in club history to do that since Stan Coveleski in 1921, Kluber finished seven innings with only four hits allowed and 79 pitches. Gonzalez, who's 10 for 22 with three walks in his career against Kluber, started for Miguel Sano at third base.

"Probably the last guy you want hitting off Kluber is Marwin because he's had so much success, and he rifled that one in the gap," Indians manager Terry Francona said. "That's all it was."

The start of the season produced all kinds of newness, beyond just Baldelli's debut in the dugout. The Twins unveiled a new backdrop beyond center field, with 5,700 sea green juniper plants now serving as the batter's eye . The Indians wore uniforms without the divisive Chief Wahoo logo on them for the first time in 70 years .

The first-pitch temperature was 49 degrees for the first March opener at Target Field, where the Twins played their lid-lifter on April 5 last year at 37 degrees.

Indians: Lindor, who started the season on the injured list with a strained right calf and a sprained left ankle, was headed for a second opinion from Dr. Robert Anderson, an ankle and foot specialist in Green Bay, Wisconsin, who has worked extensively with NFL players.

Twins: Sano, who will be out until at least early May while the severe cut near his right Achilles tendon heals, has joined the team and begun off-field workouts. Baseball activities and an eventual minor league rehab assignment will still be a couple of weeks away.

After a day off, the series resumes on Saturday afternoon. The Indians will send RHP Trevor Bauer, coming off a career-best 2018 season with a 2.21 ERA that was the third best in the majors, to the mound. RHP Jake Odorizzi will start for the Twins.