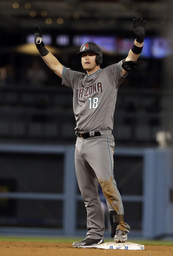 LOS ANGELES (AP) Carson Kelly went to the batting cage three or four times as the innings rolled on. He put on his catching gear and took it off a couple of times as well, waiting for double switches that never happened while the game stretched well past midnight.

When Kelly finally got to make his debut for the Arizona Diamondbacks, he came through with a hit that stopped a marathon.

Kelly delivered a pinch-hit RBI double in the 13th inning, and the Diamondbacks won the longest regular-season game in Dodger Stadium history, 5-4 over Los Angeles.

The 6-hour, 5-minute game ended early Saturday morning shortly after Kelly came through in his first at-bat since joining the Diamondbacks in the trade that sent franchise cornerstone Paul Goldschmidt to St. Louis.

Kelly is one of three catchers on the Arizona roster, and since he didn't get one of the season's first two starts behind the plate, the defensive specialist was eager to contribute elsewhere.

After Nick Ahmed drew a two-out walk and stole second in the 13th, Kelly got jammed on a pitch by Yimi Garcia (0-1), but still muscled his 19th career hit just inside the right field line.

"It was a great feeling," Kelly said. "I've had lots of moments like that before, but this one was pretty special. We kept battling. We showed a lot of heart. We had adversity, but we battled through it."

Pinch-hitter Christian Walker hit a tying three-run homer in the seventh for Arizona. One day after giving up a franchise-record eight homers in a blowout loss on opening day, the Diamondbacks demonstrated their resilience.

"I am so proud of these guys because of the fight we had," manager Torey Lovullo said. "We got beat pretty good yesterday, and they fought all day long to win this game."

Matt Andriese (1-0) walked four and escaped several jams during 2 1/3 innings of hitless relief for Arizona. Greg Holland pitched the 13th for his first save.

A.J. Pollock kicked off a four-hit performance against his former teammates with the Dodgers' only homer way back in the second inning, but Los Angeles blew two late leads and went scoreless in the final six innings of the team's longest regular-season home game.

"We had some opportunities late, six innings on the back end, and we couldn't cash in," Los Angeles manager Dave Roberts said. "They got a couple of big hits when they needed them."

Corey Seager celebrated his second game back from Tommy John surgery with a tiebreaking RBI single in the seventh, but Arizona tied it again in the eighth when Ketel Marte beat out his potential double-play groundout with the bases loaded, allowing David Peralta to score.

Los Angeles loaded the bases for Pollock with a two-out rally in the 10th, but Andriese made a spectacular behind-the-back stop of Pollock's hot comebacker to end the rally.

Ross Stripling pitched scoreless three-hit ball into the sixth for the Dodgers. Ray struck out nine over five innings for Arizona, but also walked five and left with a deficit when he couldn't retire Pollock, who reached base three times.

Home plate umpire Scott Barry left the game before the 12th inning. He was hit squarely in the mask by a fastball from Matt Andriese during the 10th.

Pollock drove in three runs and reached base five times in his second game for the Dodgers after seven seasons with Arizona. Pollock didn't hit any of the Dodgers' opening day-record eight homers Thursday, but he mashed a hanging slider from Robbie Ray in the second Friday. Pollock then drove a two-run single to center in the third, and he delivered a two-out double in the seventh before Seager brought him home.

The Dodgers were up 3-0 and apparently cruising when they brought in new reliever Joe Kelly to face Walker, who hit his second homer in two games. Kelly, the former Boston reliever, made an inauspicious debut with the Dodgers, who gave him a $25 million, three-year deal. He gave up two more hits and another tying run in Arizona's eighth-inning rally.

Russell Martin reached base five times in his first game since 2010 for the Dodgers, who reacquired the veteran catcher in the offseason. He walked and reached second in the 12th, but the inning ended when pinch-hitter - and opening day winning pitcher - Hyun-Jin Ryu barely failed to beat out a grounder to short.

Diamondbacks: 1B Jake Lamb made his season debut, going 1 for 5. Lamb had back tightness during the spring, forcing the Diamondbacks to postpone their plan to prepare Lamb to play third base more often to get Walker's big bat in the lineup at first base.

Dodgers: Clayton Kershaw will throw a three-inning simulated game Saturday in his latest step back from shoulder inflammation. The ace is likely to make at least one minor league start before returning, Roberts said.

Arizona's Zack Godley takes the mound in search of his first victory at Dodger Stadium, where he is winless in five career appearances. He faces Kenta Maeda, who is back in the Dodgers' rotation for now after dominating as a reliever last season and following up with a strong spring.