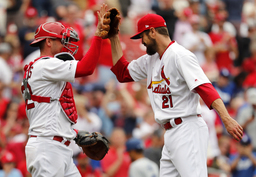 ST. LOUIS (AP) Matt Wieters made the most of his chance.

Wieters drove in a three runs and stole a base for just the third time in six years, leading the St. Louis Cardinals over the Los Angeles Dodgers 11-7 Thursday for a four-game sweep of the NL champions.

Making his first start this season, the 32-year-old Wieters hit a sacrifice fly in the second inning and a two-run double in the fifth that put the Cardinals ahead 8-7. With runners at the corners in the fifth, Wieters stole second as Matt Carpenter struck out, his first steal since April 27, 2017, and just the ninth of his major league career.

"Normally, I try to get one a year," Wieters said with a smile.

Wieters went to spring training with a minor league contract and earned a job as a backup to nine-time All-Star Yadier Molina. Wieters had just one previous plate appearance this season; he was hit by a pitch on April 1.

St. Louis' bullpen combined for 5 1/3 scoreless innings in the series finale and allowed one run in the four games.

"This whole series was a well-played series on our side," Wieters said." Today we had to do it a little differently coming from behind. The bullpen's been amazing of just nailing it down for us."

Harrison Bader was hit by pitches with the bases loaded in both the second and fifth innings. He was the first player to force in runs twice in a game while getting hit since Toronto's Reed Johnson on April 16, 2005, according to the Elias Sports Bureau.

"Over the course of 162 games, every RBI matters," Bader said. "Whether you walk or get a single, they all count. It came at a good time. If I've got to wear it for the club, I'd do it again."

He was part of a rare two-run wild pitch in the second inning by Walker Buehler. When the ball bounced toward the first base dugout and first baseman David Freese let catcher Rocky Gale chase after it, Jeff Gyorko scored from third and Bader from second.

"Out of the hand, saw the ball in the dirt," Bader said. "Obviously, I've got to watch the runner in front of me, but I knew it was kind of kicked away far enough. As I was rounding third base, I was just picking up the first baseman to see what he was doing. He really wasn't going after it too hard, so I just took a chance and took an extra base."

Jose Martinez matched a career high with four hits, including an RBI double off Yimi Garcia in a two-run sixth. St. Louis set a season high for runs and swept the Dodgers in a four-game series for the first time since July 15-18, 2010.

Freese and Buehler hit solo home runs in the second inning for Los Angeles, and Kike Hernandez homered to cap a four-run third.

Giovanny Gallegos (1-0) pitched 1 1/3 scoreless innings in his first appearance of the season for the Cardinals to win in relief of Michael Wacha, who allowed seven runs and eight hits in 3 2/3 innings. It was the first Major League win for Gallegos in 23 appearances.

Trailing 7-4, St. Louis started to close when Gyorko singled in a run in the third. The Cardinals' four-run fifth included a run-scoring error by second baseman Max Muncy.

Los Angeles Dodgers ace Clayton Kershaw is scheduled to make his season debut on Monday at home against the Cincinnati Reds.

The 31-year-old left-hander, troubled by left shoulder inflammation since early in spring training, made his second minor league injury rehabilitation start on Tuesday. He gave up two solo home runs and five hits over six innings for Double-A Tulsa against Springfield. He struck out six, walked none and threw 59 of 81 pitches for strikes.

Cardinals: Utility player Yairo Munoz will rejoin St. Louis as a 26th player for this weekend's series against the Cincinnati Reds in Mexico.

Dodgers: SS Corey Seager was hit by a pitch by Gallegos in the fourth, left at the start of the bottom half and was diagnosed with a bruised left hamstring.

"We flushed it out with treatment after that hit by pitch, and it feels better," Seager said. "We get on the flight home, obviously, with altitude you've got to see how it responds to that, so tomorrow we'll know more."